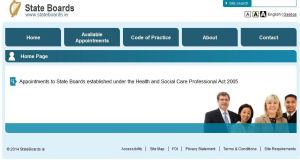 Brendan Howlin this morning said he had previously introduced the portal stateboards.ie (homepage pictured) which informs the public of vacancies and collates expressions of interest in those roles for the Minister.

Ministers will have to choose all State board appointments from a shortlist provided to them by the public appointments service under new measures agreed by the Government.

Minister for Public Expenditure and Reform Brendan Howlin announced a revised system for filling vacancies on boards, with all appointments now going through a dedicated website.

As part of the changes the Government has agreed to standardise the opening up of all vacancies to members of the public under the Public Appointments Service.

The move comes in the wake of the controversy over John McNulty’s appointment to the Irish Museum of Modern Art (IMMA) shortly before his nomination to the Seanad’s cultural panel was announced, although Mr Howlin said he was not acting too late on the issue.

He claimed the move is part of a “suite of reforms” being implemented by the Coalition but conceded recent controversies had allowed quicker progress to be made.

Mr Howlin said that, until now, only some board positions were advertised on stateboards.ie, with the remainder being advertised on individual department websites.

The line minister will still make the decision on who will be appointed to State boards after picking one candidate from a shortlist presented by the Public Appointments Service (PAS).

“Each minister will set the criterion to be determined for each board: the skills mix, the experience, the gender balance and so on that is required.

“The Public Appointments Service (PAS) will then advertise those appointments and will ensure that all candidates are suitable qualified to serve on the board in accordance with the criteria laid down by each line minister.”

Mr Howlin will bring more detailed proposals back to Cabinet in the coming weeks and he said it will take a just over a year to get the new system up and running.

“In the future, anyone who is interesting in serving on any state board will have one access point to be able to determine what state boards are available across every line department.”