After weeks of negotiations Enda Kenny is expected to be reelected as Taoiseach on May 6th. 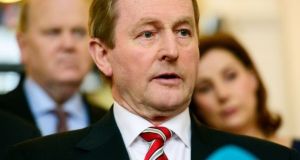 A Dáil vote for taoiseach will take place at noon on Friday, Government Chief Whip Paul Kehoe has confirmed.

Acting Taoiseach Enda Kenny’s appointment as Taoiseach will be voted on first and then Mr Kenny if, as expected, is voted in as Taoiseach, will go to Áras an Uachtaráin to receive his seal of office. He will then return to the Dail for a debate on the appointment of the new Cabinet.

However, the Fine Gael announcement of a noon vote on Friday has caused “uproar” among the Independents still in talks with the party, sources have said.

Discussions between Fine Gael and Independent TDs were taking place on Thursday after the party agreed a deal with Fianna Fáil last week. Mr Kenny had earlier said any vote to take place on Friday would be announced by 4.30pm on Thursday.

Speculation in Leinster House suggests Independents may be allocated three cabinet positions, as well as one so-called super junior – the junior minister who attends cabinet meetings.

It was also claimed that another two junior ministerial positions will be given to non-party deputies.

The proposed “Programme for Partnership” document agreed between Fine Gael and Independents is based on a five year timeframe, runs to 150 pages and outlines a number of planned measures in areas such as housing, health and job creation.

Fine Gael sought the support of at least six Independent TDs in a bid to secure the 58 votes required to support a minority government. Minister for Agriculture Simon Coveney said there was no upward limit on the number of Independents the party would work with.

The Irish Times understands one of the measures contained in the “Programme for Partnership” is the creation of a new body which will seek to assist homeowners facing repossession.

Under this proposal a court will be unable to hear a repossession case until it has been processed by this new agency and all resolution options examined.

The proposed agreement also commits to the introduction of the working family payment and to establishing a citizen’s convention to examine the Eighth Amendment.

There are a series of promises in the deal relating to agriculture including a commitment from Mr Coveney to review single farm payments.

The major outstanding sticking points between Fine Gael and the Independents included the location of wind turbines, the appointment of judges and concerns surrounding turf cutting. It is understood a €500 million investment in education over five years was sought by a number of Independents on Thursday.

Some rural TDs have indicated a desire to bring the Fine Gael proposals to their constituents.

Waterford Regional Hospital is to get an immediate, independent clinical review with funding provided for an immediate ramping up of services. It is understood Mr Halligan is satisfied he will get what he wants in the medium term.

Other proposals outlined in the partnership document include:

The establishment of a new model of community banking.

An atlantic economic development corridor as well as an additional €100 million to be set aside for the Wild Atlantic Way.

County councils must publish the breakdown of how they spend commercial rates.

Increase the State pension and the living alone allowance above the rate of inflation.

Increase the minimum wage to €10.50 an hour over the next five years.

A committment to look at whether post offices could be “one stop shops” for government services.

No closure of small schools without the consent of parents.

Finance for councils will be linked to their ability to deliver in terms of housing.

Increase the roads budget by 50 per cent.

Incentives for developers to build and lease homes to housing authorities and associations.

Incentives for tenants and landlords to agree long term leases as well as an increase rent supplement by 15 per cent.

A commitment to use the post-2018 Nama surplus to fund affordable housing.

The development of a “cost rental” option for low income families and an increase in the number of cost rental units available.

A new “Help to Build” funding scheme for the development of affordable housing will be set up.

Legislation to force banks to offer split mortgages to householders in mortgage distress.

End the use of hotels and B&Bs for homeless families and introduce enhanced family mediation services, services to victims of domestic abuse and community mental health services to tackle homelessness.

Cut number of pateients waiting longer than six hours in A&E departments from 32 per cent to less than 7 per cent by 2021.

Increased payments for those with disabilities while an additional 10,000 children will receive medical cards.

Relaxation of the whip system but all parties will operate on the basis of “good faith” and “no surprises”.