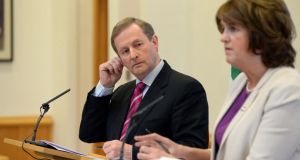 The Government’s target for achieving full employment has been brought forward by two years from 2020 to 2018, Taoiseach Enda Kenny confirmed after today’s Cabinet meeting.

Having 2.1 million people at work was an “ambitious and realistic goal”, Mr Kenny said.

“Our goal is that all of the 250,000 jobs that were lost during the recession will be able to be restored and that’s why, at the suggestion of both myself and the Tánaiste, Cabinet agreed to bring forward plans from 2020 to be implemented by 2018 to achieve full employment.”

Mr Kenny said unemployment was still too high and was the main reason for unfairness and inequality in society.

Mr Kenny confirmed the Low Pay Commission, under Minister of State for Business and Employment Ged Nash, would meet in the next few weeks.

Mr Kenny also said an “overall economic roadmap” would be published and debated as part of a forthcoming economic statement.

Tánaiste Joan Burton said 2015 was a year of opportunity in terms of getting people back to work.

Ms Burton said that at the peak of the boom employment stood at 2.1 million but that figure fell at the height of the economic crisis to 1.8 million people.

“There is no sector of the Irish economy and there is no part of Ireland that should be left out of the move to get people back to work.”

Ms Burton said apprenticeships and traineeships for young people would be prioritised, saying they had been successful in countries like Germany and Austria.

Under the Back to Work Family Dividend, people could retain social welfare benefits of up to €30 per child a week.

Ms Burton said there would be increased funding for Jobs Plus, the scheme under which employers are paid by the Government to take on people who have been long-term unemployed. The scheme would also be extended to include young people.

Ms Burton also said many construction workers had been “sidelined” in the employment market but would be helped to upskill by the Government.