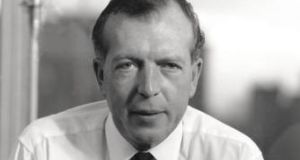 John Junor: understood to have apologised ‘to some extent’ for remark in ‘Sunday Express’ article

An article written by the editor of the Sunday Express asking “wouldn’t you rather admit to being a pig than be Irish?” resulted in an apology “to some extent”, according to documents in the Office of the Taoiseach file, released with the State papers.

In a letter on February 14th, 1985, to the secretary of the Federation of Irish Societies, an umbrella body for Irish clubs in Britain, then taoiseach Garret FitzGerald said he was acutely aware of the offence taken by so many in the Irish community “at the tone and content of the remarks” made by Sir John Junor.

He said that then minister for foreign affairs Peter Barry had made his concerns known to the newspaper “at a senior level” through the Irish Embassy.

“I understand that Sir John has apologised to some extent for his original remark in question,” he said.

The taoiseach drew the line at instructing semi-State companies not to advertise with Express Group publications, saying it was a matter for management in the companies. However, he advised that if the society wished, it could direct its influence on the companies directly.

Junor was later accused of racism and admonished by the British press council.