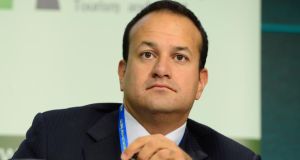 Minister for Transport Leo Varadkar: “The Department of Justice is not fit for purpose. They accepted what the gardaí told them.” Photograph: Frank Miller

A Government Minister has delivered the sternest criticism to date of the Department of Justice, describing the key ministry as “not fit for purpose”.

Minister for Transport Leo Varadkar yesterday criticised the department for its failure to scrutinise the information passed on by An Garda Síochána.

“The Department of Justice is not fit for purpose. They accepted what the gardaí told them,” Mr Varadkar told The Week in Politics on RTÉ television yesterday.

He said people were shocked by the series of scandals and revelations surrounding the Garda. “I am probably less shocked than most people because of my dealings with Maurice McCabe.”

However, Mr Varadkar said that Government was determined to act following the publication of the Guerin report and the resignation of former minister for justice Alan Shatter.

“The Government does get this. We do know there is a big problem with the gardaí and the justice system,” he said.

He listed five priorities including: open recruitment of a new commissioner; the establishment of a commission for investigation; increased powers for An Garda Síochána Ombudsman Commission (GSOC); changes and renewal in the Department of Justice and the setting-up of an independent Garda authority.

Mr Varadkar contended that GSOC’s powers were inadequate. “GSOC is a toothless dog if ever there was one and they will admit that themselves,” he said.

A number of Opposition deputies, including Independent Clare Daly and Pádraig Mac Lochlainn of Sinn Féin, yesterday repeated their view there were deep systemic problems exposed by the series of scandals that needed to be addressed urgently.

Root-and-branch review
It came as Tánaiste Eamon Gilmore said the most important thing was that all complaints in relation to the Garda were dealt with as promptly and effectively as possible.

He said one of the problems that emerged with allegations was that many of them were allowed to drift for an inordinately long time without being properly addressed.

Mr Gilmore indicated a systemic and root-and-branch review of the whole Garda oversight apparatus might be necessary, saying the principal legislation, the Garda Síochána Act 2005, was deficient in several key respects.

He said the manner in which An Garda Síochána, and its oversight, operated had become an anachronism in a modern society.

“We are trying to run a police service in the 21st century with a structure that comes from the 1920s.

“The Garda was established at a time when there was civil war, where there was a threat to the State. That’s where the reporting structure and the very hierarchical nature of the Garda comes from, where the commissioner reports directly to the minister for justice. We need to modernise that and have an independent Garda authority,” he said.

Mr Gilmore said the problems in the Garda had not emerged in the past few months and his party had long held the view that the 2005 Act had not achieved its purpose.

‘Garda authority’
“We have been arguing over the past decade for the establishment of a Garda authority. We have been arguing for a much more robust way of dealing with complaints and allegations. The changes we are now making – the fundamental change in the management and governance of the Garda – are the most fundamental since the 1920s. There is the fact that a garda can go directly to GSOC with a complaint.

“We were never happy with the idea of the confidential recipient. We thought at the time [2005 and 2007 when the regulations for the recipient were established] that was a way of getting around a robust way of having allegations and complaints dealt with.”