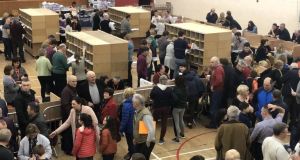 Galway East returned all three sitting TDs - Sean Canney (Ind); Ciaran Cannon (FG) and Anne Rabbitte (FF), but the count was not without drama as the 21-year-old Sinn Féin candidate Louis O’Hara was very close to pulling off a shock win.

He eventually came up 337 votes short of Rabbitte in the final count, while she was elected without reaching the quota.

Former minister of state Mr Canney was the first TD to be elected in, exceeding the quota of 10,631 by 1,661 votes in the 7th count, benefiting from significant transfers from candidates in north Galway, where he is based.

Mr Cannon kept sufficiently ahead of party colleague Pete Roche, who polled strongly in North Galway, to ensure he retained his seat in the final count.

Mr O’Hara who performed strongly throughout the rural constituency just came up short on transfers from eliminated candidates standing for Fianna Fáil and Fine Gael. The last time Sinn Féin had a seat in the constituency was in 1918 when Liam Mellows was elected to the first Dail representing both Galway East and North Meath.

Mr O’Hara got 7,108 first preferences (16.7 per cent) most of which was a young vote though there were some indications of Fine Gael and Fianna Fail losing support because of their insistence they would not go into government with his party.

The other notable performance was that of Donagh Killilea in his first general election outing for Fianna Fáil. The son of former TD and MEP Mark Killilea, polled strongly in north Galway after only 18 days campaigning with 5,171 votes before being eliminated in the fifth count.