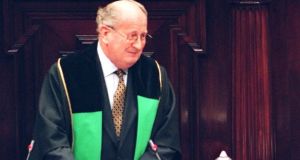 Séamus Pattison during a sitting of the Dáil in 1998. Photograph: Frank Miller. 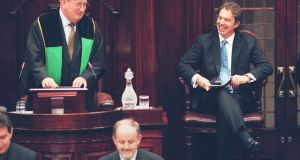 Séamus Pattison addressing the Dáil ahead of a speech by British prime minister Tony Blair in 1998. Photograph: Frank Miller 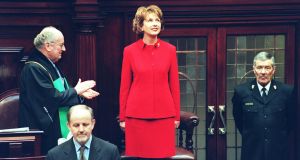 The President Mrs McAleese stands to applause from the Dáil including Ceann Comhairle Séamus Pattison in 1999. Photograph: Frank Miller.

Former Labour TD and Ceann Comhairle Séamus Pattison has died at the age of 81.

Mr Pattison was a TD for Carlow-Kilkenny for 46 years until 2007 and served as Ceann Comhairle to the Dáil for two terms from 1997 to 2002, and Leas Ceann Comhairle from 2002 until his retirement from politics in 2007.

Labour leader Brendan Howlin said in a statement: “It is with sadness that I’ve learnt of the death today of my great friend and colleague Seamus Pattison TD.

“Seamus was a stalwart in the Parliamentary Labour Party that I joined as a young man. He was generous both with his time and his advice to this young parliamentarian.

“He served Carlow-Kilkenny faithfully and loved his native constituency.

“He enjoyed his period as a Minister of State in the Department of Social Welfare and excelled as Ceann Comhairle where he particularly enjoyed representing the parliament he loved.

“Seamus represented the best of an old Labour tradition. I was proud to have known him and worked with him. May he rest in peace.”

President Michael D Higgins shared his condolences in a statement: “Seamus served with great distinction in public life at every level for almost five decades, including terms in office as Ceann Comhairle and Leas-Cheann Comhairle of Dáil Eireann, Minister of State, Chairman of Oireachtas Committees and as a member of the European Parliament.

“As Father of the House in his final term in Dáil Éireann, he was regularly sought out by new TDs across the political spectrum for counsel because of his sharp political brain, and the wisdom he drew from many years of experience,” President Higgins said.

“I, with so many others have the warmest memories of Seamus as both a friend and colleague over a lifetime in politics and we shall all greatly miss his effortless charm and infectious sense of humour.”

“He was a gentleman who commanded the respect of all sides of the house. He was fair and impartial and ensured that all TD’s got a fair hearing when he sat in the chair,” Mr Martin said.

“As Father of the Dáil he was always on hand to offer advice and support to TD’s and Senators when needed. I remember many conversations that I had with him down through the years, and one thing which always struck me was his strong sense of social duty. He was a passionate man who espoused the values of the Labour movement throughout his long career.

“On my own behalf and on behalf of the entire Fianna Fáil family I would like to offer my condolences to his family.”

Taoiseach Leo Varadkar paid tribute to Mr Pattison, and said in a statement: “Seamus was a well respected Ceann Comhairle, and as a Minister, TD and MEP he represented his constituents in Carlow and Kilkenny for nearly five decades with distinction. I send my condolences to his family at this sad time.”

Mr Pattison is survived by his brothers Joseph, Michael and Monsigeur Francis Pattison who resides in San Diego, United States.