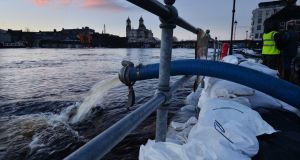 Sandbags along the banks of the east side of the River Shannon at Athlone keep the river from flooding houses in the Strand Area. Photograph: Alan Betson/The Irish Times

The European Commission has rejected suggestions that EU laws are to blame for the recent severe flooding in Ireland.

A spokeswoman for the European Commission said member states decide their own rules on how to manage their water courses.

The comment follows criticism from groups and representatives in the UK and Ireland that EU legislation such as the Water Framework Directive has prevented local authorities from undertaking dredging of rivers.

While the European Commission has said that dredging is not banned by EU legislation, in effect member states are prohibited from undertaking dredging if it disturbs certain habitats which can then lead to a breach of the EU Water Framework Directive.

The directive, which was introduced in 2000, aims to ensure environmental and ecological standards in water. While the directive includes the possibility of exceptions due to unforeseen circumstances such as flooding or drought, this does not apply to water management policies undertaken in advance of flooding events.

In a statement, the commission underlined its opposition to dredging as the de facto response to flooding, noting that it can result in the problem being pushed downstream.

“Dredging is not always the solution for flooding,” a spokeswoman said. “It may help to sort out a local problem but it may also transport the problem downstream, sometimes from rural to urban areas where the damage on properties and economic activities can be much higher. Therefore the basin-wide approach included in EU policies is essential to find effective and long-term solutions.”

Fine Gael MEP for Ireland South Sean Kelly said he believed dredging should be considered as a response to the flooding. “I think all options now need to be considered. There will have to be a reassessment of how we handle floodings. The one size fits all model that is used across all countries in Europe doesn’t work.”

He also called on the Government to apply for financial help from the EU Solidarity Fund, an emergency fund that was established in the wake of floods in central Europe in 2002.

To date, no application has been made by the Government for the fund, the European Commission confirmed, though a spokesman for the Department of Environment said that an application would be considered in due course.

Mr Kelly said that while the threshold to access the fund is 0.6 per cent of Gross National Income (GNI) a figure that could reach hundreds of millions of euros, Ireland could be eligible for funding through a regional application. In 2009 Ireland secured €13 million from the EU solidarity fund following severe floods.

Speaking over the weekend, Minister of State Simon Harris said that projects to ease the flooding situation along the river Shannon may require the Government to breach EU habitats directives on wildlife.

The EU Birds and Habitats Directives - separate EU legislation to the Water Framework Directive which dates back to the early 1990s - allow for breaches of the directive in situations of “over-riding public interest” but member states must first undertake an assessment of the options available to prove that such damage is unavoidable.

Speaking on Saturday, Mr Harris said that while some of the proposals to deal with the flooding will breach EU directives, public safety comes first.

“We have a humanitarian crisis in some areas and in those instances protecting those communities may trump any EU directive that is in force,” he said.

“We need to ensure the public good is to the absolute fore in ensuring any necessary works can be carried out. Yes, we have obligations under directives and that’s important but the most important thing is people, their homes and their livelihoods.”