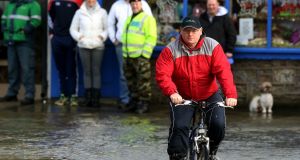 Members of Cork County Council have backed a call for more funding to clear drains and gullies in a bid to prevent serious flooding in future.

The funding would enable council staff to clear networks in order to prevent a repeat of the estimated €15 million-€20 million worth of damage caused to roads in the county by three storms in December.

Some 40 of the 55 council members spoke during a lengthy debate on the impact of flooding in the county.

Several councillors backed a call from Fianna Fáil’s Cllr Ian Doyle for a comprehensive programme of dyke and drain clearance.

Cllr Doyle, from Charleville, said major flood relief works had worked well in Mallow and Fermoy towns but there had been localised flooding in many rural areas and that was due to drains and gullies not being properly cleared.

“I know of one house that was flooded due to a drain blocking and I’d say there are roads all over the county that were flooded because drains weren’t cleared in years and if we don’t have the money to do it, we should apply to the Department of the Environment for funding.”

Several councillors were highly critical of Minister for the Environment, Alan Kelly, accusing him of trying to “pass the buck on to the local authorities” by saying funding wasn’t a problem when the Government embargo on recruiting outdoor staff was having an impact.

Fianna Fáil’s Cllr Seamus McGrath said it was “hypocritical” of Mr Kelly to say resources were not issue when he was aware of eight houses in Ballinhassig and two houses in Passage West which had flooded because there was no funding available from the OPW.

Party colleague, Cllr Bernard Moynihan, said he was “sick of listening to Alan Kelly” saying there was no problem with funding, but when councillors went to municipal council staff to ask them to carry out local works they were told there is no funding available.

“The rainfall measured at Cork Airport from 4th December 2015 until 3rd January 2016 was 461mm which compares with a three-month expected winter average of 370mm or 123mm per month,” said Mr Lucey.

The significant rain from Storm Desmond on December 4th and 5th, Storm Eva on December 23rd and Storm Frank on December 29th and 30th resulted in wet conditions across the county, high rivers and reduced capacity for drainage, he said.

“These conditions were exacerbated further by persistent heavy precipitation experienced from 24th to 26th December and heavy rainfall associated with Storm Frank on December 29th leading to local flooding across the county during the period 29th to 31st December.”

Sinn Féin’s Cllr Donnchadh Ó Laoghaire said the council’s ability to respond to the flooding was severely affected by the Government embargo on recruitment, which needed to be abolished to avoid any repeat.

“The reality is that Cork County had 1,285 outdoor staff in 2008. By the end of 2014, that figure was down by 32 per cent, to 878. Clearly this has had an impact on the council’s ability to respond to emergency queries and to flood risk situations.

“While much was done, and I wish to credit the county council’s staff for their hard work, as well as the communities, clearly there were shortfalls, and ultimately this comes down to resources.

The council cannot do it all with the staff it has,” he said.

“I am calling on the Government to do away with the embargo once and for all. It has always been a blunt tool, was often a false economy, and is now restricting the ability of councils to respond to crisis situations. The embargo needs to be ended, and soon.”