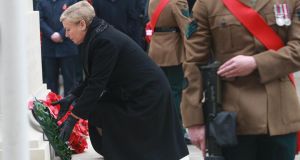 Tánaiste and Minister for Justice Frances Fitzgerald lays a wreath at the Cenotaph in Belfast during Remembrance Sunday commemorations. Photograph: Bill Smyth

Frances Fitzgerald has spoken of the importance of taking part in a Remembrance Sunday commemoration in Belfast. The Tánaiste and Minister for Justice placed a laurel wreath at the Cenotaph in the Garden of Remembrance in the grounds of Belfast City Hall on Sunday as part of a tribute to the memory of those who died during the first and second World Wars.

A Government Minister has attended services in Northern Ireland every year since 2012.

Prayers were said for the thousands of Irishmen who died in conflicts “for the freedom we enjoy” today and for the men and women serving in the armed forces at present.

Ms Fitzgerald spoke of the importance of being at the ceremony, alongside the Lord Mayor of Belfast and representatives from the British and Northern Ireland governments, and of the warm welcome she had received.

“So many people across the island lost their lives, 50,000 families affected by the loss of a loved one during the first World War, so really important to all come together to remember that,” she added.

Ms Fitzgerald said she found the service at the cenotaph “very moving” and emphasised how important it was “to remember together and to look at our shared histories across the island”.

She said 2016 had been a special year in terms of commemorations across Ireland and of her pleasure at how inclusive it had been. “I think of my own family, my grandfather served as a soldier in the British army, my father was a colonel in the Irish Army and you just think of that history and it is repeated across the whole island, these kind of complexities that we really didn’t speak about as much as we do now,” she said.

“I don’t think we focused enough on what we shared in common but we are doing that more and more and I think that is really in the interests of reconciliation, peace and the whole of the island moving forward.”

Secretary of State for Northern Ireland James Brokenshire said he was “honoured and humbled to represent the UK government at this very special service”.

“The contribution and sacrifice of the men who fought in the battle was immense, and we should never forget it.”

1 Coronavirus: More ‘striking’ evidence BCG vaccine might protect against Covid-19
2 This time, the future of the euro really is at stake
3 Coronavirus: Start date for more than 100 contact tracers delayed by 11 days
4 Meet the Irish woman leading New Zealand’s Covid-19 response
5 Coronavirus: Doctors fear Covid-19 yet to peak in the State as ICUs near full capacity
Real news has value SUBSCRIBE