Fitzgerald says Garda ‘crisis’ must be dealt with

Frances Fitzgerald is the new Minister for Justice. She moves from the Department of Children and Youth Affairs, where she is succeeded by Charlie Flanagan in his first ministerial portfolio. 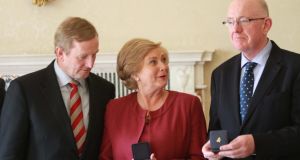 An Taoiseach Enda Kenny with Minister for Justice Frances Fitzgerald and Minister for Children and Youth Affairs Charlie Flanagan at the Aras where the new ministers received their seals of office today.

Minister for Justice Frances Fitzgerald has said there is a “crisis of confidence” among the public in relation to An Garda Síochana that has to be “dealt with and has to be changed”.

In her first public comments since her appointment this morning, Ms Fitzgerald also paid tribute to the Garda whistleblowers.

“We do have to listen to critics,” she said.

Earlier, Tánaiste Eamon Gilmore said his former Cabinet colleague Alan Shatter had made the right decision to resign as Minister for Justice.

His remarks follow the appointment this morning of former children’s minister to the justice portfolio. Ms Fitzgerald was presented with her seal of office at Áras an Uachtaráin.

Mr Gilmore, in a reference to what is believed to be strong criticism of the former Justice Minister in the Guerin report on the Garda whistleblowers issue due out tomorrow, said that when Mr Shatter saw the report himself he had taken responsibility and stepped down.

Describing the report as “very serious” and “very damning”, Mr Gilmore told reporters in Galway: “I’m not going to pre-empt the publication of the report. I know what’s in it, but it will be out tomorrow and it will show that Alan Shatter made the right decision to resign.”

He denied that the Labour party had been ’outside the loop’ in the dramatic events which led to the surprise decision by Mr Shatter yesterday.

Mr Gilmore added: “Since the first issue arose in recent months in relation to GSOC and then in relation to the dossier and so on, the government has acted very quickly to deal with the issues.

He said that in establishing the Garda authority and putting in place a number of investigations into what happene in relation to the whistlblowers, he said the former Minister had acted very quickly and taken responsibility for what was in the Guerin report.

“I think anybody can contrast how quickly this government has dealt with issues arising in the Garda Síochána, compared to what was done by previous governments,” he said.

Mr Gilmore also confirmed that the Taoiseach had spoken to him on Wednesday evening about the Cabinet changes announced in the Dáil today.

Announcing the new ministerial appointments in the Dáil this morning Mr Kenny praised Ms Fitzgerald for her reform of children’s rights during her tenure in her previous position.

Women now occupy all the key justice roles in the State, including Garda Commissioner, Attorney General and Director of Public Prosecutions.

“I know she will bring the same energy, commitment and reforming zeal to her new role as Minister for Justice and Equality,” he said.

“Restoring confidence to the Irish justice now becomes the number one priority for the new minister,” Mr Kenny said.

The Dáil approved the ministerial nominations by 80 votes to 35. The Taoiseach will take on the Defence portfolio while it is being re-organised.

“As a Government we want transparency and accountability at the heart of our public service. It goes to the heart of what we all seek to achieve here in this house in representing the Irish people on a daily basis,” Mr Kenny said

Mr Kenny reiterated the Government’s commitment to establishing a Garda Authority to work alongside the Garda Ombudsman and Garda Inspectorate in providing oversight for the force.

Fianna Fáil leader Micheál Martin said it was not enough to put a new face into the Department of Justice.

“Appointing a new minister does not by itself deal with what has happened and the unprecedented collapse in public confidence in vital parts of the administration of justice,” he said.

Mr Martin said Ireland was being denied even basic information about how the Garda Commissioner was “pushed” into resigning.

“Instead they were smeared, bullied, dismissed,” he said.

Mr Adams said there was a culture of secrecy, maladministration, unaccountability and no oversight at the top of the Garda and other State agencies that needed reform. “There is a crisis of public confidence in the administration of justice,” he said. “These problems will not be resolved by rearranging the deck chairs.”

Independent TD Mick Wallace - who has been to the fore in calls for investigations into alleged Garda wrongdoing - said it would be a wonderful achievement if Ms Fitzgerald turned around the force and made it a service in which people are proud.

“Accountability is not something that they do,” he said. “Transparency is missing, we don’t really know how they operate a lot of the time, we hardly know what rules they work to, we don’t know if they are human rights-proofed.

“We have been shocked by what we found out in the last 18 months.” Independent TD Clare Daly said the country was at a crossroads over the future of policing.

Ms Fitzgerald represents Dublin Mid-West, having previously been a TD for Dublin South-East and also a Senator.

She is a former chairwoman of the National Women’s Council and vice-president of the European Women’s Lobby.

Married with three sons, she is a former social worker and worked closely with Mr Shatter on family and equality legislation in her time as Children’s Minister and her appointed is seen as a logical move for a smooth transition in the Department.

A loyal supporter and friend of the Taoiseach, she is very much viewed as a liberal on social issues and her appointment is expected to be welcomed by the Labour Party which is keen to advance socially liberal legislation.

Mr Flanagan is chairman of the Fine Gael parliamentary party and TD for Laois-Offaly.

Over the years he has held a number of front-bench portfolios, including justice.

He is the son of Oliver J Flanagan, who served as Fine Gael TD for the same constituency from 1943 to 1987 and was minister for defence for a time in the Fine Gael Labour coalition in the 1970s.

The appointments end feverish speculation about Alan Shatter’s successor since his shock resignation yesterday in the wake of senior counsel Sean Guerin’s report into allegations of Garda malpractice.

Mr Shatter stepped down ahead of tomorrow’s publication of a report examining allegations of malpractice within the Garda Síochána made by whistleblower Maurice McCabe.

The 300-page report was written by Mr Guerin who recommended that a full Commission of Investigation be held into Mr McCabe’s allegations.

The report also contained criticism of the response of Mr Shatter as Minister to the allegations.

It was on the foot of such criticism that the Dublin South TD felt compelled to resign.

Mr Kenny said yesterday the report was “critical of the inadequacy of the actions taken by number of the agencies” notably An Garda Síochána but also including the Department and the Minister in responding to allegations made by Sergeant Maurice McCabe.