Fisherman: ‘I’d have a problem with Sinn Féin wanting to keep USC’ 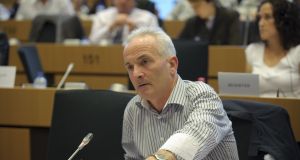 John O’Brien is a fisherman and father of six from Inishbofin in Donegal. He is concerned about the future of fishing and the retention of rural services. Read John’s full profile here

I think the campaign has been quiet so far, but then I’ve been at sea for much of it. This Fine Gael talk of ‘keeping the recovery going’ simply doesn’t apply to Donegal where there hasn’t been any recovery, with young people going to England and flying back to Derry every few weeks if they are lucky, or going to Canada and Australia.

The manufacturing work has gone east to Asia, the broadband services still haven’t improved, and no party seems to be focusing at all on natural resources, and rebuilding our inshore fishing fleet.

Other EU member states seem to be able to look after their coastal and rural communities better than we do.

The issue that stands out for me so far is the debate on tax. I thought the Universal Social Charge (USC) was an emergency measure to fund our health services and I’d have a problem with Sinn Féin wanting to keep it. But then I wouldn’t have any problem paying it if there was an improvement, as we still have serious difficulties with health provision.

In my line of work, I don’t get to meet canvassers much, but there’s been a lot of stuff through the postbox at home alright.

John O’Brien was in conversation with Lorna Siggins as part of The Irish Times Meet the Voters series, profiling 10 sample voters in a bid to track the impact of the 2016 General Election campaign on their voting intentions. Follow them atirishtimes.com/election-2016/meet-the-voters