‘Fingers’ Fingleton has €30m pension and no regrets

Highlights of former Irish Nationwide Building Society chief, Michael Fingleton, at the banking inquiry as he answers questions on his role in INBS' 5.4 billion taxpayer bailout. 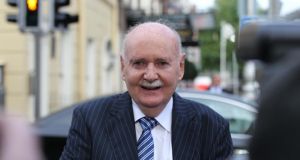 Michael Fingleton: Accepted that the bonuses paid by the building society were “excessive”. Photograph: Collins

A bit like French cabaret singer Edith Piaf, Michael Fingleton has no regrets.

Why would he when he has a €30 million pension pot to draw from?

“Fingers”, to use his nickname, arrived at Leinster House in jolly form, happily posing for photographs outside. He’s a bit greyer around the gills now and the trilby hat is gone but Fingleton has lost none of his self-confidence.

The Michael O’Leary of his time (a description given by Irish Nationwide’s chairman Michael Walsh in later testimony) told the Oireachtas banking inquiry yesterday that he doesn’t regret any decisions taken during his 38 years in charge of the society.

Fingleton doesn’t accept the negative findings of the Nyberg report, produced for the Government after the crash. He doesn’t accept the Central Bank of Ireland’s findings in July that Irish Nationwide “committed multiple breaches of financial services law and regulation, including persistent failure to comply with its own internal policies and procedures” from 2004 to 2008.

Irish Nationwide didn’t create the property bubble, while criticisms f its loan approval processes and governance in reports by KPMG and Deloitte were brushed aside.

As Fingleton tells it, Irish Nationwide was solvent and well capitalised at the time of the crash.

Just €30 million of deposits flowed out following the government guarantee decision in September 2008 compared with €2 billion at Anglo. His narrative is that the society had slammed the brakes on its commercial lending in late 2007 due to concerns that the Irish market was overexposed. It just came a year too late.

For legal reasons, committee members were barred from grilling Fingelton about his €1 million bonus from 2008.

Nobody thought to check if he was wearing his €11,500 retirement watch. Discussion on that was ruled off limits, too, by the chair.

Safe to say that Fingleton had no regrets about those rulings either.