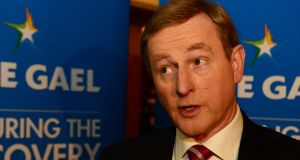 Mr Kenny said rates of personal taxation in Ireland are too high in comparison to the United Kingdom and other countries and again repeated his pledge that the Universal Social Charge will be abolished in its entirety.

Fine Gael’s position on the USC differs from Labour, which is only committed to abolishing the USC for those earning less than €70,000.

Mr Kenny also said the alternative to re-electing the current government is “a dangerous and unstable alliance including Sinn Féin and Fianna Fáil”.

Both Sinn Féin and Fianna Fáil have said they will not share power with each other.

The Taoiseach said the reduction of the corporation tax rate to 12.5 per cent in the mid-1990s could provide a template on how to reduce personal taxes, which he said are a disincentive to work.

“In the mid-1990s, Fine Gael in Government decided to introduce the 12.5 per cent rate of corporation tax that has been the anchor of our jobs policy ever since,” told the annual Fine Gael presidential dinner in the Double Tree by Hilton Hotel, Dublin.

“Some said at the time that such a low rate of corporation tax would starve the exchequer of resources needed for services and investment. The opposite has been the case.

“Let’s now take the lessons of our successful corporate tax into reform of our personal tax system. As the UK and other countries now seek to match Ireland’s corporate tax rate, we must now secure the economic recovery by reducing tax rates on income.

“That is why, if returned to Government, Fine Gael will put complete abolition of the USC at the centre of the most radical overhaul of personal taxation in a generation, all designed to make work pay, encourage labour force participation and entrepreneurship and keep the recovery going.”

Mr Kenny said abolition of the USC will create an extra 225,000 jobs, bringing unemployment down from its current level of 9.4 per cent to 6 per cent, and attract 70,000 young emigrants back to Ireland.

Abolition of the USC would increase “Ireland’s attraction as a dynamic hub for young talent”, the Taoiseach said.

While Mr Kenny said the last few budgets have been difficult, he added the package announced by Minister for Finance Michael Noonan and Minister for Public Expenditure Brendan Howlin last week will “keep that recovery going, while providing relief and better services for the Irish people”.

“It includes steps like a cut in the USC, more nurses and doctors for the health service, more affordable and quality childcare, and ending the unfair treatment of the self-employed. These are sensible, affordable steps that will keep the recovery going and bring its benefits to more households.

“We delivered on our promise in the last election to protect jobs by abandoning the further income tax increases that had been planned by Fianna Fail. And in our final two budgets in this term of Government, we have cut the tax rates on low- and middle-income earners, down from 52per cent to below 50per cent to support the economic recovery by rewarding work and effort.

“Since the introduction of the USC by Fianna Fáil, Ireland’s personal tax system has damaged the incentive to work and is now a barrier to keeping the recovery going. The rate of tax on income here remains too high - much higher than in the UK and other countries against which we compete for mobile capital and skills, making Ireland less attractive as a location to live, work and start a business.”

The Taoiseach criticised Fianna Fáil for opposing the USC cuts and accused Micheál Martin’s party of wanting to keep “the tax rate on middle income families at over 50 per cent”.

“They think the best way to make Ireland more equal and to lift up struggling families is to drag other families down. That is not the Fine Gael way. We put a strong, open, export-oriented, jobs-rich economy at the heart of our vision of a fairer, more prosperous and inclusive society.”

Mr Kenny said next year’s general election will be “a vitally important one for Ireland”.

“People will have a clear choice between stability and economic progress on the one hand: and chaos and uncertainty on the other.

“A clear choice between the proven record of Fine Gael and the Labour Party on the one hand; or a dangerous and unstable alliance including Sinn Féin and Fianna Fail on the other. That’s the alternative.

“Well, I for one, don’t want to see Ireland’s hard-won progress put at risk by those who wrecked our economy several times in the past, or by those whose policies would surely wreck it in the future.

“Fine Gael has a plan to keep the recovery going. It’s a plan based on enterprise, not speculation.”