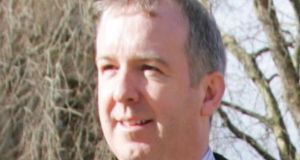 Brian Walsh: Thanked for his service to the House. Photograph: The Irish Times

Mr Walsh announced last November he was standing down as a candidate in the general election because of ill-health. He said he had been experiencing health problems for some time and had been hospitalised twice.

“I have done everything possible to resist making this decision and had hoped to overcome my condition in order to be able to continue,” he said.

“But in recent days it has become clear that I have no choice but to accede to medical advice and withdraw my candidacy in the forthcoming general election.”

Announcing Mr Walsh’s resignation in the Dáil, Ceann Comhairle Seán Barrett wished him well and thanked him for his service to the House.

“I wish his family and himself every success in the future,” he added.

Mr Walsh was elected to Galway County Council in 2004 and served as mayor of Galway a year later. He was elected as a TD in 2011.