Regina Doherty said clear legislation would have to replace article 40.3.3 if it was removed 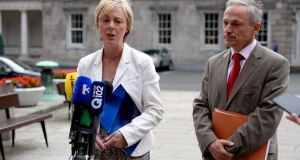 Fine Gael TD Regina Doherty: disagreed with pro-choice view that women in Ireland did not have determination over their own bodies. Photograph: Cyril Byrne / The Irish Times

Fine Gael TD Regina Doherty has backed her party colleague Olivia Mitchell’s view that the eighth constitutional amendment should be put to a referendum because Ireland’s abortion regime is not satisfactory.

Ms Doherty, who represents Meath East, said she believed the majority of Irish people did not want a “liberal” abortion regime, but “brave leaders” needed to allow the people to vote on the issue.

“If we are to genuinely address the issue of victims of rape in a meaningful way, or to address the issues of parents of children who we know are not going to live through the birth or even survive the pregnancy, the only way that those issues can be addressed is to remove or repeal the Eighth Amendment,” she said.

“Now, maybe that’s not what people want, but we need to be brave enough . . . to allow the Irish people to exercise their own consciences and make their own decisions.”

Speaking to radio station LMFM, Ms Doherty said she understood why political leaders were reluctant to act and said clear legislation would have to replace article 40.3.3 if it was removed. “I’m not sure that the current situation does satisfy anybody. It certainly doesn’t satisfy the pro-choice people, and that’s not a movement that I would be in sync with,” she said.

“Not everybody lives in the black or the white of pro-life or pro-choice ideologies, because there are lots of situations in the middle of the grey areas that when those situations visit people’s houses then they have to make very difficult decisions.”

Ms Doherty said she also disagreed with the pro-choice view that women in Ireland did not have determination over their own bodies.

“I genuinely and firmly believe that women already have the determination over their own bodies and that’s called contraceptives, so make the decisions before you find yourself in a position where you’re using an abortion as a form of a contraceptive afterwards.”

Earlier, Independent TD Clare Daly said she welcomed Ms Mitchell’s comments and hoped they would give a “green light” to some of her colleagues in Fine Gael.

“She does represent a significant enough opinion within Fine Gael that is progressive on the issue and reflects society’s opinion,” Ms Daly said. She said she was “a bit disappointed” that Ms Mitchell said a vote should not take place before the next general election.

A spokesman for Fine Gael said the Protection of Life During Pregnancy Act was the only proposal that would be brought forward by this Government on the issue.

Referring to promises made by the party before the last election, he said: “We said that Fine Gael would not legalise abortion in Ireland, and we did not.”

The Government was monitoring the implementation of the new legislation and would continue to do so, he said.

Meanwhile, the Pro-Life Campaign criticised Ms Mitchell’s remarks. The organisation’s deputy chairwoman, Cora Sherlock, said: “I agree with Olivia Mitchell that the debate on abortion should be respectful and informed, but there is no point in having a debate that completely airbrushes the rights of the unborn child out of any discussion.

“Those most vocal in calling for the deletion of the remaining constitutional protection for the unborn are seeking to broaden the grounds for abortion and are ignoring the adverse effects of abortion for both women and their unborn babies.”

Green Party leader Eamon Ryan called for a fresh debate on the issue. “We believe the Government should reconvene a dedicated constitutional convention to allow such a debate take place,” he said.