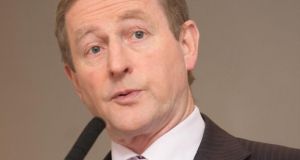 Taoiseach Enda Kenny’s personal satisfaction rating has risen to 35%, according to a new poll published in the Sunday Times. Photograph: Gareth Chaney Collins

Fine Gael’s popularity has risen five points to 31 per cent, while Labour is up one point to 8 per cent in a new political poll published on Sunday.

The combined total puts the popularity of Coalition parties at 39 per cent, according to the results of a poll published in the Sunday Times.

Coalition party leaders have also had a boost individually: Joan Burton is up five points to 39 per cent; Enda Kenny’s personal rating is up four points to 35 per cent.

Overall Government satisfaction is at 35 per cent, up seven points, according to the poll.

The results showed a 4 per cent decline for Sinn Féin, now at 17 per cent, while Fianna Fáil dropped 1 point to 19 per cent.

Independents and other groupings have also declined by two points and now stand at 24 per cent.

The poll was conducted by research agency Behaviour and Attitudes and was conducted over a 10 day period up to November 9th, according to the report.