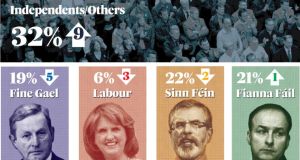 The latest Irish Times/Ipsos MRBI poll shows Fine Gael is now at its lowest standing since 2003, while Taoiseach Enda Kenny’s satisfaction rating is at its lowest point since he took over the leadership of the party in 2002. 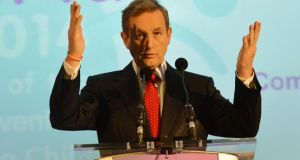 Taoiseach Enda Kenny: his satisfaction rating is at its lowest since he took over the leadership of Fine Gael in 2002. Photograph: Alan Betson

The two Government parties have suffered a serious slump in support over the past two months, according to the latest Irish Times/Ipsos MRBI poll.

Fine Gael is now at its lowest standing since 2003, while Taoiseach Enda Kenny’s satisfaction rating is at its lowest point since he took over the leadership of the party in 2002.

The poll reveals a massive surge in support for Independents and smaller parties who are at their highest-ever rating in an Irish Times poll.

Sinn Féin has slipped back a little since the last poll in October, while Fianna Fáil has improved marginally.

The survey was undertaken on Monday and Tuesday this week among a representative sample of 1,200 voters aged 18 and over, in face-to-face interviews at 100 sampling points in all constituencies. The margin of error is plus or minus 2.8 per cent.

The sharp decline in support for Fine Gael will send tremors through the party with a general election expected within the next year. The seven-point drop in Enda Kenny’s satisfaction rating to just 19 per cent leaves him the least popular party leader in the Dáil, while the Government’s satisfaction rating of 17 per cent is the lowest since it took office.

Fine Gael’s share of the vote has dropped across all regions of the country and across all age groups. The only category where the party vote is holding up is among the best-off AB voters.

Labour has also suffered a serious loss of support following a modest recovery in the last poll. Joan Burton has seen a big drop in satisfaction after an initial good performance in her first poll as leader.

Although Sinn Féin support has slipped back two points since the last poll, it has held up well considering the publicity surrounding the Maíria Cahill affair. Party leader Gerry Adams has suffered an 11-point drop in his rating, probably as a result of the controversy, but he still has the highest rating of any party leader.

Fianna Fáil’s marginal rise in support will come as welcome news for the party after a significant drop in the last poll. At 21 per cent, it is ahead of Fine Gael and almost level with Sinn Féin.