While men continue to significantly outnumber women candidates, there are more women contesting these elections than in 2009. 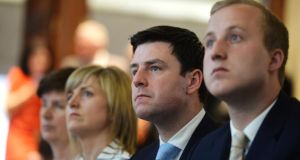 ‘The increase in female candidacy in Fine Gael between 2009 and 2014 is encouraging but with a membership consisting of over 40 per cent women (the highest of the four main political parties), it was in a better position than most to meet its own gender target.’ Above, election candidates Stephanie Regan, Sharon Tolan, John Clendennen and Garrett O’Dowd at the launch of the Fine Gael local election campaign in Dublin. Photograph: Alan Betson

While men continue to significantly outnumber women candidates, there are more women contesting these elections than in 2009. Then 314 (17.2 per cent) of the candidates were women.

The increase in female candidacy is welcome but leaves plenty of room for improvement, particularly given that the Electoral (Amendment) (Political Funding) Act 2012 obliges political parties to select at least 30 per cent women candidates at the next general election, rising to 40 per cent seven years thereafter. Parties which fail to reach the legal gender quota in those elections will lose 50 per cent of the funding they receive from the State to run their operations.

While the legal gender quota does not apply at local elections, a review of female candidacy rates across the parties reveals that People Before Profit (38.6 per cent), the Green Party (32.6 per cent), Sinn Féin (31.6 per cent) and the Anti-Austerity Alliance (30 per cent) have all met or surpassed the key 30 per cent threshold. The Labour Party has come close, with women comprising just over 29 per cent of its candidates. As the table shows, the Green Party, Sinn Féin and the Labour Party have all recorded increases in their percentage of women candidates since 2009 when their female candidacy rates stood at 22.1 per cent, 22.8 per cent and 23.1 per cent respectively. Women constitute 18.3 per cent of the total number of “other” candidates (those running for smaller political parties and as Independents). In 2009, this figure stood at 10.8 per cent.

The final figures for Fine Gael and Fianna Fáil reveal mixed results however. In 2009, 18.1 per cent of Fine Gael candidates were women. In 2014, women comprise 22.8 per cent of the total number of candidates running for the party, meaning Fine Gael has fallen short of its self-imposed 25 per cent gender target for these elections.

Fianna Fáil candidates
The increase in female candidacy in Fine Gael between 2009 and 2014 is encouraging but with a membership consisting of over 40 per cent women (the highest of the four main political parties), it was in a better position than most to meet its

own gender target. The under-representation of women among Fianna Fáil candidates in these elections has been well documented. With just 17.1 per cent women candidates, Fianna Fáil is falling short of its own gender target of 33 per cent for these elections but most disappointingly, the party has recorded just a slight increase on the percentage of women candidates it selected in 2009. If Fine Gael and Fianna Fáil continue in this vein and fail to meet the legal 30 per cent gender quota at the next Dáil election, they face losing between €700,000 and €1,000,000 on an annual basis in terms of State funding.

Research by Prof Yvonne Galligan of Queen’s University Belfast highlights that a continuing bias towards traditional gender roles in Ireland contributes to the under-representation of women in Irish politics. Yet, as can be seen from the data presented here, female candidacy varies across parties. This begs the question, is there something peculiar to some parties that precludes selection of more women or prevents more women from coming forward and running as candidates?

PhD research by one of the authors, Claire McGing, sheds some light on this. She has found that conservative party cultures are a contributing factor to the low level of women in Irish politics. Party cultures and traditional stereotyping as regards women’s and men’s roles in political parties can lead to a situation where women party members remain less likely to be seen – by themselves and their political parties – as potential candidates.

Modest increase
Just 17 per cent of the seats in local government are occupied by women. The modest

increase in women candidates in this year’s local elections may mean that figure rises after May 23rd. Given that 77 per cent of new TDs elected in the 2011 general election served in local government and considering that research shows that local government experience is more significant for women than it is for men when seeking a Dáil seat, an increase in the number of women councillors following this month’s elections may prove significant in seeing more women elected to Dáil Éireann in future years.

Noirín Clancy is national chairwoman of the 5050 Group. Claire McGing teaches political geography and gender politics in the department of geography, NUI Maynooth. Fiona Buckley teaches gender politics in the department of government, University College Cork. All are members of the 5050 Group (5050-group.com/blog/ and @5050Group).