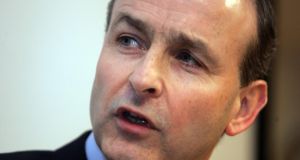 At a time when he should be concentrating on rebuilding the Fianna Fáil Mícheál Martin has been dealing with an exhausting series of challenges from within the party.

Fianna Fáil is now a small party that sporadically operates like the colossus of Irish politics it once was.

Since shortly before the game-changing 2011 General Election, which reduced the near-permanent party of power to a decayed wreck, the mantle of Uachtarán Fhianna Fáil has rested with Mícheál Martin.

Between then and now, while he wanted to focus on rebuilding and renewing the party, he has instead been engaged in a permanent and exhausting game of political “whack-a-mole” with troublesome TDs, Senators and MEPs breaking ranks.

Like the frustrating subterranean mammals in the 1970s arcade game, scions of political dynasties have popped up to cause problems for the leader with alarming frequency.

Mr Martin has often appeared reluctant to wield the mallet, however.

He appointed Éamon Ó Cuív as his deputy leader after the death of Brian Lenihan, but Mr Ó Cuív opposed his party’s agreed stance on the European Fiscal Compact treaty. A new deputy leader was never appointed.

Former minister Mary Hanafin, deputy leader to Mr Martin ahead of the last General Election in which she lost her seat, successfully contested the recent local elections against the leader’s wishes.

The uncomfortable issue of judicial interference by politicians also raised its head again last week when party spokesman on justice Niall Collins, wrote a letter seeking leniency for a man who was awaiting sentence for the possession and sale of cannabis.

He had to allow his parliamentary party members a free vote on the abortion legislation after it became clear he could not convince many of them to join his support of the Government Bill.

Mr Martin has appeared to forgive in every instance, despite the drip-drip damage to his authority.

The presidency also caused problems for Mr Martin. He made a clumsy approach to broadcaster Gay Byrne.

The man at the centre of Mr Martin’s latest problem, Brian Crowley, had long coveted the Head of State role, although the bad blood between the pair is said by insiders to pre-date that particular controversy.

Now he has decreed that Mr Crowley has put himself outside the party by acting unilaterally in leaving Alde to join an Euro-sceptic grouping.

Yet despite these internal party challenges, Mr Martin managed to reinstate Fianna Fáil as the largest party in local government in the recent Local and European elections.

On a day that Opposition rivals Sinn Féin did so well, this was quite an achievement.

Unlike some of his egotistical lieutenants, Mr Martin was an early-adaptor, absorbing the scale and shock of seat losses incurred in 2011 and understanding that only a show of unity could bring the party back from the brink.

Long-running feuds needed to be forgotten about if not resolved, but this has not happened.

Fianna Fail is a little party with a big party’s problems.

Mr Martin has been a good general, but not one of the lucky ones preferred by Napoleon Bonaparte.