Micheál Martin is under pressure, as some fear he has become Sinn Féin’s best recruiter 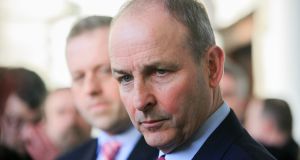 In public and in private, senior Fianna Fáil figures are urging Fine Gael to shed its reticence and enter detailed coalition discussions with their party.

Ahead of Wednesday’s five-hour round of “policy exchange” discussions, some in Micheál Martin’s party claimed the session would prove if Fine Gael was serious about providing the country with a government.

The ratcheting up of pressure – not just on Fine Gael, but on the Green Party too – belies the weakness of Fianna Fáil’s position and the bind Micheál Martin finds himself in.

None of the options facing Martin are attractive. He has ruled out entering government with Sinn Féin and is now reliant on Fine Gael to make him taoiseach.

If he does not form a government by the end of April, some of his senior TDs say privately, his leadership of Fianna Fáil should end.

Some in his parliamentary party believe Martin has boxed himself in by shutting down the Sinn Féin option so quickly – although there’s little desire to enter government with that party – and has driven some voters further into the arms of Mary Lou McDonald by repeatedly attacking her, allowing McDonald further her claim to outsider status.

The longer the process of government formation continues, the greater the chance that disquiet in Fianna Fáil will bubble to the surface. But against Fianna Fáil’s willingness to talk, Leo Varadkar still insists he wants to go into Opposition.

Those close to the Taoiseach insist this is Varadkar’s genuine desire and say he is not merely posturing before doing a deal with Martin. Some Green Party figures left talks with Fine Gael in recent days believing Opposition is the latter party’s ultimate goal. However, the difficulty of actually achieving that goal is evident to all.

Having said he would work with Fianna Fáil as a last resort to avoid a second election, the question is how far the Taoiseach is willing to go to get to the Opposition benches. Does he, against a background of the coronavirus outbreak and Brexit threats, string Martin along for months?

Fianna Fáil sources say there is a “misguided impression” in Fine Gael that Fianna Fáil will “crack” and talk to Sinn Féin. This, those at the top of Fianna Fáil insist, will not happen, but many TDs are deeply hostile to coalition with Fine Gael too.

Some chat around Leinster House – including at the highest levels in Fine Gael – has suggested President Michael D Higgins could even refuse a request from Mr Varadkar to dissolve the Dáil if negotiations hit an impasse. It has been argued that that event could then force parties to reach agreement where they had previously failed to do so.

However, given that he is fiercely protective of the independence of the presidency, the President may not want to be used as a political tool, and Mr Higgins, if there is no government formed by May, may actually allow for a dissolution of the Dáil and another election.

Coronavirus: One death, 25 new cases reported in State 17:49
Judge gives landlord a week to halt Covid-19 parties near UCC 17:32
Brightest comet of the century visible in Irish skies for the next week 17:09
Planning permission granted for Waterford North Quays 16:55
Children who go abroad must self-isolate for 14 days before return to school in September 16:55