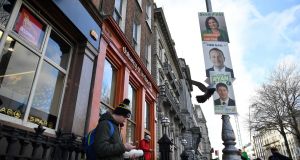 A pedestrian walks past election posters in Dublin ahead of the general election. File photograph: Ben Stansall/AFP via Getty Images

The Irish in Britain are as much an accepted part of society as a pint of Guinness with a carvery lunch. Not that the Irish in Britain necessarily identify as British (many of them don’t), more that they’ve been normalised in a way which would have been unthinkable until very recently.

From the 1970s through the 1990s, showing an Irish passport at a British entry point was enough – as happened my mother – to be interrogated by special-branch police for three hours while your son and husband awaited your release. Having an Irish accent was enough to be turned away at the door for jobs you were otherwise qualified to do, and showing any kind of sympathy for an Irish/British relationship model which didn’t favour partition was enough to arouse suspicion from some quarters.

Go back further, and lodgings and shops hung signs which read “No blacks, no dogs, no Irish”. When my grandfather first came to London in 1947 as a metalworker with experience in both welding and smithing, he was turned away from most jobs on the dockyards on the supposition that his nationality made him a “health risk” to other workers.

The term Paddy was used with particular venom. Stereotypes of the Irish as lazy, stupid, violent, alcoholic and devious were prevalent in everything from cultural touchstones such as Fawlty Towers to stand-up comedy, politics and journalism. IRA violence was talked about as if it had formed inside a vacuum, while state-sponsored British violence against civilians was given a pass as a natural consequence of “keeping the peace”.

Despite all this, anti-Irish bigotry is now treated as an aberration; a blip in an otherwise good-natured relationship which rationalises centuries of colonial misadventure as “civilising the natives”. This attitude is nothing new, and certainly isn’t restricted to the Irish, but where elements of the British press have sometimes gone out of their way to pay lip service to the historical wrongs committed against other minority groups, Ireland remains a peculiar blind spot.

Consider the treatment of the recent Irish election. After a huge backlash against the incumbent Fine Gael government – from a public dissatisfied with everything from an inflated housing market to non-enforcement of tax for big American tech firms – mainstream republican-socialist party Sinn Féin topped the poll. Fianna Fáil ultimately garnered more seats, but Sinn Féin obtained 2 per cent more first-preference votes than any other party; with 18-24-year-olds thought to be responsible for much of this surge.

Britain has an assumption that we are exactly the lazy, stupid, violent, alcoholic miscreants we were always thought to be

In some corners of the British press, this was treated with outrage. The Daily Telegraph dismissed the Irish electorate as succumbing to “dangerous” populism. Veteran BBC broadcaster John Simpson tweeted that “Ireland, which has been politically stable for decades, has . . . succumbed to populism now”. One British journalist writing in the Washington Examiner even surmised that Ireland had “stepped back from democracy” on account of the bizarre assertion that Sinn Féin had grown out of an “IRA Marxist insurgency”.

What these takes ignore, of course, is that Sinn Féin have been in government on and off for over 20 years in the north of Ireland, and were even encouraged by the Tory government to retake their seats after the Stormont institutions collapsed. They also ignore the fact that virtually every mainstream party in Ireland was at one time or another also associated with paramilitarism. The difference is the perception that Sinn Féin’s links with the IRA have, to paraphrase Gerry Adams, “not gone away, you know”.

So how do we interpret this? On the one hand, Britain seems to possess a genuine fear of countries who deviate from the accepted norms of right-wing centrism. One of the chief motivators for the Brexit vote was a desire to get away from such anti-British values as the European Convention on Human Rights and progressive concepts such as open borders and shorter working weeks.

On the other hand, as we have seen, Britain has a tenured sense of entitlement when it comes to Ireland and an assumption that we are exactly the lazy, stupid, violent, alcoholic and devious miscreants we were always thought to be. How can we be trusted to govern ourselves properly?

The moment I knew for sure that the British attitude to Ireland had regressed was toward the end of 2016, mere months after my partner and I had relocated to Liverpool (traditionally known as something of a safe haven for the Irish in England). An old man stopped us in the street after clocking our accents, turned to us while we were mid-conversation and spat “F*** off home, scum!” before walking on. A few months later, a colleague at a school reception I worked in – and who I thought I got on rather well with – made a joke about how she was afraid I might “bomb her house”.

Like the undercurrents of anti-Semitism which still flourish in parts of the UK, the rampant and often violent Islamophobia, as well as ongoing state violence against young Afro-Caribbean men and boys in particular, anti-Irish bigotry is still alive and prevalent.

Perhaps the problem is that colonial history is not taught in British schools and any sense of responsibility towards the rest of the world is either completely absent or attached to a humiliating sense of paternalism. Perhaps this is where we need to start, though I fear it may already be too late. How, after all, can one educate their way out of centuries of entitlement?

James Patterson is a poet and is originally from Newry

1 Irish woman in Sweden: No lockdown, little distancing, people still shaking hands
2 Coronavirus: Situation in Ireland ‘misrepresented’ because of limited testing
3 What is Houseparty, the app everyone’s talking about – and not in a good way?
4 Coronavirus Q&A: How to shop safely during Covid-19
5 Acclaimed Connemara writer Tim Robinson dies at 85 from coronavirus
Real news has value SUBSCRIBE