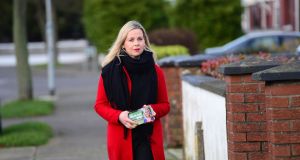 Fianna Fail general election candidate Lorraine Clifford-Lee said she was ‘shaking like a leaf’ after the incident.Photograph: Dara Mac Dónaill / The Irish Times

A female Fianna Fáil candidate has claimed she was verbally assaulted by party members working for her running mate while out canvassing earlier this week.

Lorraine Clifford-Lee, who is standing for the party in Dublin Fingal, says supporters of Senator Darragh O’Brien intimidated some of her team during the canvass in Portmarnock, north Dublin on Tuesday.

Mr O’Brien has said he did not see or hear what happened and while he insisted there was no “row” he acknowledged there may have been “a couple of personality clashes” between his team and Ms Clifford-Lee’s team.

“I didn’t hear any row so I can’t speak about that,” said Malahide based Mr O’Brien, seen as his party’s best chance of a Dáil seat in Dublin. He added that “tempers can get a little frayed” so close to polling day.

He said there were big canvassing teams out for both candidates and they can sometimes get “overly competitive”.

Ms Clifford-Lee was added to the party ticket in Dublin Fingal with Mr O’Brien, in part to ensure Fianna Fáil complied with gender quota rules which say that 30 per cent of all candidates must be female.

She believes Fianna Fáil can win two seats in the constituency, where Mr O’Brien held a Dáil seat between 2007 and 2011, when the party suffered its post-bailout electoral meltdown.

Ms Clifford Lee claimed she was canvassing with a small group in a housing estate in Portmarnock, the town she lives in with her family, when some of Mr O’Brien’s crew shouted at her from across the road.

She said that while constituency tensions are always “bubbling under” between running mates in the same party, this was “something else”.

She added the encounter lasted around five minutes, during which rivals shouted that she was not actually from Portmarnock and was a “blow in”.

Ms Clifford-Lee said she was “shaking like a leaf” and that the incident was “intimidating for young members of the party” canvassing for her “in their first general election campaign”.

“This is exactly why women in particular are reluctant to go into politics. This is the kind of behaviour you’d expect in a bar. I don’t want my daughter getting involved in politics if this how politics is going to be. This belongs to the dark ages. We need to have enlightened situation.”

“We were going around minding our own business. It’s going really well and we are pushing for two seats. To be told I am not living in this area. Everyone knows where I live. I am very concerned about it. We’re both standing for the same party. We should be competing for two seats.”