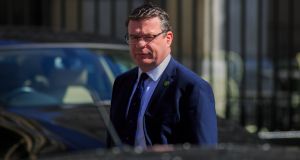 A joint letter from Fianna Fáil and Fine Gael on government formation was sent to the Green Party on Tuesday evening.

It is understood the letter will pave the way for a meeting between the three party leaders on the scope for talks.

The Greens last week published 17 conditions for entering discussions on a potential programme for government, and Fianna Fáil and Fine Gael have been considering the document in recent days.

One of demands is that any coalition the Greens enter would commit to a reduction in carbon emissions of at least 7 per cent annually.

Earlier, Labour leader Alan Kelly asked both Fianna Fáil and Fine Gael to detail how they can “implement a radical programme for government” without tax increases on higher earners.

Mr Kelly has sent a letter to Fianna Fáil leader Micheál Martin and Taoiseach Leo Varadkar in response to the joint framework document agreed between their two parties in recent weeks.

The framework document outlined the priorities for both Fianna Fáil and Fine Gael in a potential coalition between them in an effort to woo smaller parties such as the Greens, Labour and the Social Democrats.

In his response, Mr Kelly welcomed what he called Fianna Fáil and Fine Gael’s “bold social democratic statement” that the “importance of the well-resourced, properly functioning and responsive State has never been clearer.”

Mr Kelly said, however, “it is not clear to us how the policy goals will be resourced and what fundamental choices such a government would be prepared to take”.

He asked a number of questions on the issue of funding: how much both parties are prepared to borrow until 2020; what tax measures they would consider, and how the promises can be funded without higher taxes on higher earners; what spending cuts they are considering; will the public sector pay deal be honoured; will the Defence Forces get a pay rise and whether the Covid-19 welfare payments will remain at their current level or not.

The Fianna Fáil-Fine Gael document says that there will be no increases in income tax or USC over the lifetime of any potential coalition, and Minister for Finance Paschal Donohoe has recently said that Covid-19 payments will need to be tapered off.

Fianna Fáil and Fine Gael have 72 seats between them, eight short of a majority. Labour and the Social Democrats have six each and the Greens have 12.

The Greens are seen as the likeliest to enter coalition talks, although they have not yet made a final decision to do so. Fianna Fáil and Fine Gael have said they will not talk to Sinn Féin, which has 37 seats.

Sinn Féin leader Mary Lou McDonald has said she is open to discussions on a potential national unity government, an idea which was posited by the Green Party a number of weeks ago.

Speaking to The Irish Times on Tuesday, she said she is “not conceding anything” in terms of Government formation and that the numbers “don’t add up for Fine Gael and Fianna Fáil just yet.”

She claimed Fianna Fáil and Fine Gael shared a “ common purpose” to keep Sinn Féin out of power.

“ They have a swagger when they say this is a badge of honour that they’re keeping Sinn Féin out. I think that’s absolutely extraordinary. I also think it’s shameful.”

On a national unity government, she said she would “absolutely” be open to talks but added “you would have to go to through a process of talks and negotiations, and all of that would have to be weighed up.

“That was my position then and that is my position now, but it never really never got off the ground because both of the two old parties Fine Gael and Fianna Fáil disregarded it and did not want to know.”