FG waters down proposal to ban sale of cigarettes in pubs 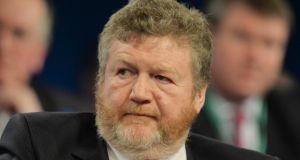 Amendment was sought changing the motion to ‘ask the Minister for Health [James Reilly] to explore’ rather than ‘introduce’ legislation. Photograph: The Irish Times

A motion to ban the sale of cigarettes in pubs was watered down at the ardfheis and became a proposal to “explore” legislation to prohibit their sale in licensed premises.

The original motion called for legislation to be introduced to “prohibit the sale of tobacco or tobacco products upon all and/or any premises licensed for the sale, supply or consumption of intoxicating liquor on or off the premises”.

But an amendment was sought changing the motion to “ask the Minister for Health to explore” rather than “introduce” legislation.

Chairman of Limerick city constituency Cian Kelly said they wanted to break the link between alcohol and tobacco.

Tobacco and tobacco products were a commodity and demand was down to supply and price. He said tobacco policy was very much based on price and it had gone from about €6 or €7 to about €9.60. It was time to move towards impeding the sale of tobacco, he said.

The 20-a-day confirmed smoker would not be affected, he said. “This is for a social smoker. I put my hands up, I’m one of them myself.”

The party also voted to regulate the sale of “so-called e-cigarettes”.

Barry Walsh of the National Executive council said e-cigarettes, which were designed to deliver nicotine by inhaling from them, had become a problem. They can be sold by anyone and to anyone including minors and the content of the fluid used to go into them isn’t regulated. “Anything can go into them.”

A lot of these shops have popped up in the last 12 months, including two in the Dublin Bay North constituency and if shops start popping up out of nowhere, there must be a lot of money and it “possibly isn’t doing much good for the people buying them”.

He said it was not acceptable those e-cigarettes, connected to the tobacco industry and sold as an alternative, were unregulated. He said it was a Europe-wide issue, being discussed in every member state.