FG strategy of carrot and stick limits number of defectors

Kenny and Reilly led campaign of persuasion within party 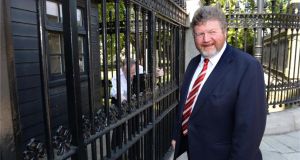 Minister for Health James Reilly were the primary movers in , who helped lead a n intensive and all-out campaign of cajoling and persuasion over the past two months Photograph: Dara Mac Donaill /The Irish Times

If there was one issue that had the potential to rupture Fine Gael it was abortion, given the preponderance of conservative-leaning Christian democrats in the party.

Any recognition of suicide risk as grounds for an abortion would cause major difficulties for many of its TDs and Senators, especially in light of Fine Gael’s commitments on this issue prior to the election.

At one stage, it looked like the number of dissident TDs would stretch into double figures. To counter this, the leadership adopted a number of strategies to contain the defectors. The strategy involved a bit of carrot and a lot of stick.

From a leadership point of view the decision to instruct the Oireachtas health committee to hold hearings on the issue was a far more successful exercise than anybody, politician or pundit, had envisaged. The evidence of legal and medical experts influenced some Fine Gael TDs who might have been veering towards a No vote, including Regina Doherty, Simon Harris and Mary Mitchell O’Connor.

From early on, Kenny also adopted an unyielding approach when it came to party discipline. TDs and Senators were told that a “three-line whip” – reserved for key issues – was being imposed. Moreover, the penalty for defiance was draconian – not only expulsion from the parliamentary party but deselection as a candidate for the next election.

Simply adopting a crude approach where errant members were bludgeoned into submission was not going to succeed. Instead Kenny and Minister for Health James Reilly led a campaign of cajoling and persuasion over the past two months, which culminated in the past week of intensive engagement.

The doubters in the Dáil and Seanad were identified and Kenny and others tried to reach out to them, listening to their concerns, trying to address all questions they had, clarifying points of law (even bringing in Attorney General Máire Whelan to clarify legal points), and trying to finesse the law to accommodate their concerns. In the end, the number of Fine Gael TDs due to vote against was confined to five: Lucinda Creighton, Billy Timmins, Peter Mathews, Terence Flanagan and Brian Walsh.

Although the rationale of Michelle Mulherin (supporting the legislation because she refused to be “booted out” of the party) was strange, the fact that she and John O’Mahony were persuaded to support the Bill represented a real psychological gain for the leadership.

Still, five TDs have defied the whip and they will be joined by a small number of Senators. The most prominent is Creighton, one of the party’s most recognisable figures, a politician of undoubted ability with long-term leadership ambitions.

For her and others, on the face of it, any ambition has ground to a halt.

1 Sinn Féin’s stand on Covid is facing increasing questions from political rivals
2 Love in a time of Covid: John and Mary marry over 40 years after first meeting
3 Cab investigates behind the massive gates of Chosen Few Motorcycle Club in Dublin
4 Big Phil is being very big about his former boss’s Covid quarantine trip
5 Coronavirus: Close contact numbers fall in sign restrictions may be working
Real news has value SUBSCRIBE