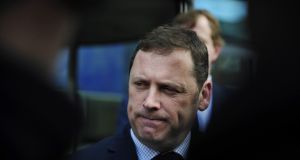 Fianna Fáil TD Barry Cowen has insisted his party will reconsider its support for a Fine Gael minority Government if ‘adequate action’ is not taken on housing. Photograph: Aidan Crawley.

Fianna Fáil TD Barry Cowen has insisted his party will reconsider its support for the Fine Gael minority Government if “adequate action” is not taken on housing.

Mr Cowen said the report on housing by the Oireachtas committee must be accepted by Minister for Housing, Simon Coveney, and implemented without delay.

He said housing was the biggest crisis facing the State and the Government needed to move to address it.

“The housing committee was set the challenge of finding solutions to the housing crisis,” Mr Cowen said. “TDs from every party worked extremely hard to meet the deadline set. The challenge for Minister Coveney is to implement these recommendations without delay.”

Mr Cowen, who was part of the negotiations between his party and Fine Gael, said action on housing was crucial to the deal struck between the two sides.

“We facilitated a Fine Gael Government, so action could be taken on this issue, which is the biggest challenge,” he said. “Fianna Fail is adamant the housing situation has to be addressed. And if adequate action is not taken, our support cannot be guaranteed.”

Mr Coveney’s spokesman said the Minister would study the report in detail before deciding how to proceed.

It is understood the Department of Finance and the Minister for Finance, Michael Noonan, have already warned against the introduction of rent certainty measures.

Mr Coveney is expected not to accept the report’s proposals to link rent increases to the Consumer Price Index. He is currently compiling an action plan for housing, with a draft expected by the end of the month.

Sinn Féin TD Eoin Ó Broin said the Minister must now move to introduce the committee’s recommendations, calling them ambitious but necessary to tackle the crisis .

Independent TD for Dublin Central Maureen O’Sullivan said she had been speaking about housing for seven years and was sick of talking about the problems. Action was now needed .

Anti-Austerity Alliance TD Ruth Coppinger declined to sign off on the committee’s housing report, saying it was not ambitious enough and that targets set on social housing were disappointing.

The TD for Dublin West, who has issued her own minority report, said the committee does not locate the cause of the crisis or identify how the measures can be funded.

“Neither does the report grapple with the major issue of the day – rocketing rents,” Ms Coppinger said. “While there were some welcome reforms, the report is missing most of what is needed to really solve the housing crisis.”