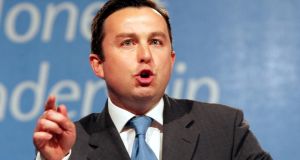 Fine Gael’s director of elections Brian Hayes has claimed Fianna Fáil cannot be trusted when they say they will not enter coalition with Sinn Féin.

Fine Gael’s director of elections Brian Hayes has claimed Fianna Fáil cannot be trusted when they say they will not enter coalition with Sinn Féin.

Speaking at his party’s ardfheis on Saturday, Mr Hayes insisted Fine Gael would not enter government with Gerry Adams’s party.

However, Mr Hayes said Fianna Fáil and its leader Micheál Martin had spent the past five years attempting to rewrite history and Mr Martin’s stated refusal to consider a possible coalition with Sinn Féin could not be taken seriously

Mr Hayes said: “Can Fianna Fáil really be trusted on the question of Sinn Féin? A desperate party such as Fianna Fáil will do desperate things.”

Mr Hayes said Fianna Fáil cannot even get a poster campaign right these days, referencing their poster featuring Taoiseach Enda Kenny in a bid to highlight what Mr Martin claimed were Mr Kenny’s broken promises on the health service.

To laughter from delegates, the MEP thanked the Opposition party for the poster and the picture of Mr Kenny.

Mr Hayes said the Irish people did not want Sinn Féin anywhere near government and insisted voters would not be fooled by the party.

He said: “Who are they answerable to? The people of Ireland or the Republican criminal underworld with their boiler suits or balaclavas?

“We will take no lectures from them about democracy and fairness in this Republic.”

He hit out at Ms McDonald’s claim that Mr Murphy was a good republican and a typical rural man.

The MEP added: “Well Mary Lou, with friends like that, who needs enemies?”

Mr Hayes said the Fine Gael and Labour Coalition had been one of the most successful Irish governments.

The Fine Gael director of elections said if the advice of “economic guru” Gerry Adams had been accepted the country would have had 30 more years of austerity.

He also said Mr Adams had been around as long as Zimbabwe’s president Robert Mugabe.

Speaking in advance of Mr Kenny’s address to the ardfheis, in which the Taoiseach made no reference to the election date, Mr Hayes said Fine Gael was ready for the election campaign.