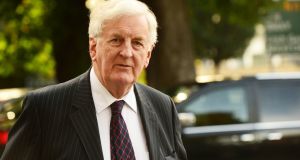 Two commissions of inquiry will have cost the State €7.6 million by the end of 2016, the Department of Public Expenditure has said.

Secretary general of the department Robert Watt sent a note to the Dáil Public Accounts Committee (PAC) yesterday outlining the money spent on the Fennelly commission and the cost of the inquiry examining transactions at the Irish Bank Resolution Corporation (IBRC).

Mr Fennelly, who is examining the recording of telephone calls in and out of Garda stations, has requested more time to complete his work and has until the end of September to finish his report.

He also examined issues around the departure of former Garda commissioner Martin Callinan.

When established, the commission was allocated a budget of €2 million in total but it was expected to finish its work by the end of 2014.

It now has until September 2016 and will have cost the State €3.7 million by then.

The department declined to give details on the legal costs or other expenses paid to Mr Justice Fennelly or his staff.

It said the terms and conditions were agreed and sanctioned by the department.

Mr Justice Brian Cregan, who is the chair of the commission, has requested €3 million between now and the end of 2016 to complete his work.

In his interim report, Mr Justice Cregan warned his work may take up to eight years to complete, meaning the bill could be considerably higher.

In a letter to the PAC, the department also declined to give details of the salary and administration costs of this inquiry.

It confirmed third-party costs would arise throughout the period of Mr Justice Cregan’s work.

The PAC had called for a detailed cost analysis to be given before a commission of inquiry is established in future.

In its response the department said it was difficult to accurately estimate the cost of a commission from the outset.

“Needs tend to change as the commission does its work and the possibility of litigation and third-party costs arise,” it said.