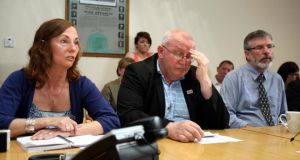 Families of the 11 people shot dead by the British Army in Ballymurphy, west Belfast in 1971 are to meet with Taoiseach Enda Kenny today.

The incident, known as the “Ballymurphy Massacre”, saw 11 local people including a mother of eight and a parish priest shot dead by the British Parachute regiment in August, shortly before the same regiment was involved in Bloody Sunday in Derry.

The families have been calling for years for an independent inquiry into the killings, but this was ruled out by former Northern Secretary Owen Paterson in 2012.

They are now pressing for the appointment of an independent panel to examine all documentation relating to the incident, which would investigate the role of bodies such as the British government, British Army, the RUC, DPP and the Coroner’s Office.