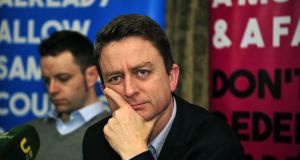 Speaking on Monday night, Iona Institute member David Quinn welcomed Facebook’s reversal. He said the block on the image ‘invites you to think it’s going to be a picture of an aborted foetus’. Photograph: Aidan Crawley

Facebook will remove blocking on an ad by the Iona Institute which shows a computer-generated image of a foetus in the womb after users of the social network were mistakenly prevented from viewing it.

The ad, which was part of the Iona Institute’s ‘Still One of Us’ campaign, had been subject to restrictions on the platform which meant the image was blurred and users were warned that “this photo may be sensitive to some people”.

Users had to click on a button to uncover the photo, leading to claims by the pro-life organisation that it was being “censored” on the social network.

However, it is understood the image was mistakenly categorised as one which could cause offence or may be sensitive by a member of Facebook’s content moderation team, known as content reviewers.

Having reviewed the ad, the company is understood to have decided the image is not in violation of its terms of service, and is taking steps to remove the blocking so that users will not have to click to reveal it.

The Iona Institute initially criticised Facebook for blocking the image, saying its decision “affects the ability of the pro-life movement in general to get its message out to the public even in a gentle way”.

“Are we now at a point where images of an unborn child in the womb cannot be shown in public even though parents see such images every day in hospitals all over the country and have no hesitation showing such images to their children?”

“That’s good news that they’ve seen sense about the matter, otherwise it would make meaningless the concept of what graphic or violent content is. It would cheapen the idea of what it is in a time when violent or pornographic imagery is commonplace,” he said.

Mr Quinn said that the block on the image “invites you to think it’s going to be a picture of an aborted foetus”.

The pro-life movement has in the past used graphic images of aborted foetuses. During the campaign on the 8th amendment, a group called the Irish Centre for Bio-Ethical Reform picketed maternity hospitals with images of dismembered foetuses. That group has been criticised for its tactics by the Iona Institute, Mr Quinn said.

The same image has been running on outdoor billboards around Dublin, with a single complaint being lodged about it since it was launched. Mr Quinn said he was “not in favour at all” of using images of aborted foetuses in political campaigns.