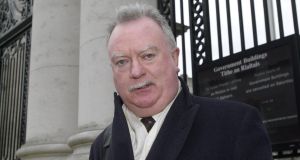 Joe O’Toole: forced to resign this week after a series of controversial interviews. Photograph: Brenda Fitzsimons

A former head of the Labour Court, Kevin Duffy, is to chair the expert commission examining water charges.

Minister for Housing Simon Coveney is to appoint him to replace former senator Joe O’Toole, who was forced to resign this week after a series of controversial interviews. The former senator said he believed water must be paid for and that he supported the “polluter-pays” principle.

Mr O’Toole blamed Fianna Fáil for his resignation, insisting he had retained the support of Mr Coveney.

Mr Duffy, a former assistant general secretary of the Irish Congress of Trade Unions, will now take up the position. It is understood Mr Coveney informed Taoiseach Enda Kenny and Fianna Fáil of the decision yesterday.

The seven-member commission is examining the future of water charges, and has five months to report to an Oireachtas committee, which will then vote on its recommendations.

The Minister and Mr Vella have been in contact but Mr Coveney is expected to stress the rationale behind the agreement reached with Fianna Fáil which underpinned the formation of a minority government.

The meeting follows an instruction by the European Commission that Ireland cannot revert to the position of not paying for water.