EU like ‘Hotel California’, you can never leave - Yanis Varoufakis 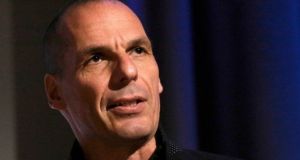 Yanis Varoufakis said the EU is like Hotel California; you can check out but you can never leave. Photograph: Neil Hall/Reuters

The European Union is like The Eagles’ Hotel California; you can check out but you can never leave, former Greek finance minister Yanis Varoufakis told an audience which included President Higgins at the Dalkey Book Festival on Thursday night.

Speaking with economist David McWilliams, Mr Varoufakis, whose seven months as minister in 2015 spanned the worst crisis in the history of the eurozone, said he was campaigning for the “Remain” side in next week’s Brexit referendum because he believed Britain needed to be a part of the EU in order to challenge the status quo.

“A vote for Brexit won’t restore the sovereignty the British people need,” he said. “By voting to leave, you’re not getting out of the mess, you’re making the mess worse.”

However, he was highly critical of British Treasury predictions of economic disaster if Britain does vote to leave, describing them as “scaremongering on steroids”.

Mr Varoufakis called for a “South African-style” commission to investigate what had happened during the banking and eurozone crises, describing what had occurred in the Greek and Irish bailouts as “19th century power politics”.

He said there had been no real negotiations between the ECB and Greece last year. “It was all an attempt to waste time,” he said.

“Your country and my country took a hit because there was no mechanism for default. We created in our wisdom a central bank without state backing, and states without central banks.”

He told the audience that the first time he met German finance minister Wolfgang Schauble, “I offered my hand, but he refused it”, and suggested that Mr Schauble’s ultimate purpose had always been to do to France what had been done to Portugal, Ireland, Spain and Greece, and that this was now happening with the changes in French law which were currently causing such conflict.

He traced the origins of this project back to French descriptions of the Maastricht Treaty in 1992 as “the Versailles Treaty without a shot being fired”.

Greece, he said, was now being ”ruled by email”. A 1,100 page memorandum which had been passed by the Greek parliament at 9am after an overnight debate had been translated from English to Greek by Google Translate. “That is the state of our democracy.”

Mr Varoufakis argued that demand for change in Europe was now so great that, if even one government stood up to pressure, “it could change everything - you only need one government to say no.” Otherwise, he said, proud nations would turn against one another.

He has now launched a pan-European movement, which includes figures such as Julian Assange, Ken Loach and Noam Chomsky, “to have a discussion about our common problems and how to deal with them in a rational fashion”.

“My faculties, as they must, remain pessimistic,” he said. “My will, my heart, are optimistic.”