EU leaders told to stay away from bailout exit events 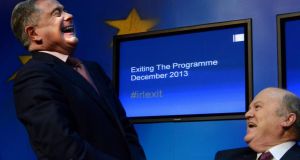 The Government turned down requests by European Commission president José Manuel Barroso and commissioner for economic and monetary affairs Olli Rehn to visit Dublin this weekend for the State’s formal exit from the EU-IMF bailout programme.

High-level Government sources have confirmed informal approaches were made to the Coalition on behalf of Mr Barroso and Mr Rehn suggesting they might attend and participate in events planned to mark the end of the three-year programme. However, the sources said the Government did not accede to the requests because it was felt that the presence of two such senior political figures associated with the troika – and its 2010 intervention that resulted in the loss of economic sovereignty – would not be appropriate.

‘Low-key’
“We felt it would not strike the right tone and send out the wrong signals. We have deliberately set out to make sure that all the events surrounding the exit were as low-key as possible,” said the source, pointing out that both were high-profile figures on the European stage.

“Sometimes the Brussels view on the politics of an issue is very different to the view that we have in Dublin. The view here was that this was something we would handle on our own,” said one source.

The sources emphasised that the refusal related only to the events, and there was no conflict or dispute.

It has also emerged the Government will pledge next week to halve the rate of unemployment by the end of the decade, setting as its objective the attainment of full employment by 2020 . While this would necessitate a cut in the jobless rate to 5 per cent or 6 per cent from the current 12 per cent, Tánaiste Eamon Gilmore said it was achievable “over a number of years”.

Calling for a new social settlement, he also said income inequality would have to be tackled and attacked high pay for business leaders.

Mr Noonan’s comments mark a shift from the previous Government position that some relief must be given for taxpayer’s money used to support the banking system.

“Without any retrospective or retroactive recapitalisation of the banks we think we can get the debt down very significantly and in my view it is entirely sustainable,” he said.

“I don’t think we’re ready to start giving out largesse just yet but both parties in government have made it clear that a lot of additional burden has been placed on hard-working families,” he said.