Call on 33rd anniversary of bombing to bring killers to justice 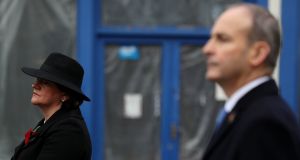 Relatives of those who died in the 1987 Remembrance Day bombing in Enniskillen have called on the Irish and British governments to bring their loved ones’ killers to justice on the 33rd anniversary of their deaths.

“I would like to see both governments come together and find out who actually perpetrated this heinous crime 33 years on,” said Stephen Gault.

His father, Samuel, was along the 11 people who were killed when an IRA bomb exploded near the town’s Cenotaph minutes before a Remembrance Sunday commemoration was about to begin. A 12th victim was left in a permanent coma and died 13 years later.

“The people who carried out this crime, if they’re still alive, are walking free, whereas the families have been locked in a prison sentence for 33 years.”

On Sunday he and other relatives gathered at the Cenotaph, as they do every year on November 8th; this year all the more poignant because the anniversary fell on Remembrance Sunday, which commemorates the dead of the first and second World Wars.

“It’s so poignant that it was on this day 33 years ago that the bomb happened,” said Margaret Veitch, whose mother and father Agnes and William Mullan were among the victims. “It’s sad for all the families. The hurt never goes away, the pain never goes away, and I just think that after 33 years Enniskillen has been totally forgotten. We’ve had no justice, nothing.”

This year the Covid-19 pandemic meant that only a few could attend the two-minute silence and wreath-laying ceremony at the Cenotaph in the town centre, or the service afterwards in St Macartin’s Cathedral.

Before the ceremony began, relatives of those killed placed small wooden crosses in the flower bed at the base of the memorial. Then, led by a representative from the local Royal British Legion, representatives from political and civic life and military and emergency services spread out around the Cenotaph, each holding a wreath.

Taoiseach Micheál Martin laid a green laurel wreath; beside him stood the North’s First Minister and an MLA for the Fermanagh area, Arlene Foster, and, representing the UK government, the Northern Ireland Office minister Robin Walker. Mr Martin is the first Fianna Fáil taoiseach to have attended the Remembrance Sunday commemoration in Enniskillen, following a tradition begun by Enda Kenny in 2012.

“This is the tradition that was set back on the 25th anniversary eight years ago,” said Stephen Gault, “and I have to say it’s very much appreciated during this dreadful time we’re in [with coronavirus] that he [the Taoiseach] came up and paid his respects to Enniskillen.”

Mr Martin told The Irish Times it was an “honour” to be present as Taoiseach, and said it was “very important” to “share and remember” all those “who died in past wars but also the Enniskillen bombing and the impact it had on the community and many families who still mourn, of course, their loved ones that they lost”.

The spirit of the ceremony, Mr Martin said, was similar to that of the shared-island unit in his department, and he had discussed this with the Church of Ireland dean of the diocese of Clogher, the Very Rev Kenneth Hall, and with the parish priest in Enniskillen, Msgr Peter O’Reilly.

“The shared island is about different traditions coming together and knitting together more strongly, as has been said during the ceremony,” the Taoiseach said.

“We need to really increase the levels of engagement not just at political level but community level, artistic and cultural level, social level, and also in terms of the spiritual level as well,” Mr Martin said.