Taoiseach opens GPO exhibition ahead of weekend of Rising commemorations

Several different nationalist groups took part in the 1916 Rising, but many of the rebels shared a similar background and motivation. 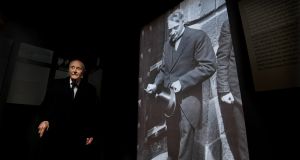 Politicians have been urged to work together in the national interest by the acting Taoiseach Enda Kenny.

In a speech at the GPO yesterday, his most significant during this weekend of commemorations, Mr Kenny said: “Ireland works best when it works together”.

A momentous weekend will see a series of events taking place nationwide to mark the 100th anniversary of the Rising.

Tomorrow’s parade through Dublin city centre will be its centrepiece.

Speaking at the opening of An Post’s GPO Witness History interpretive centre, Mr Kenny said: “It was on this site, 100 years ago that Pádraig Pearse read aloud the Proclamation of the Irish Republic in an act of brave defiance that lit the touchpaper leading to the culmination of centuries of struggle for Irish freedom.

“From the ashes of the Rising, the subsequent War of Independence, and Civil War arose a free and democratic Irish State . . . The foundation of the Irish Free State and the tradition of Irish men and women working together for the common good of our people is a legacy that we can be most proud of.

“We owe much credit to the early nation builders who built up our public institutions as unassailable pillars of democracy.”

“It was Michael Davitt, a great patriot, who said: ‘If Ireland is to reach its port of success, it would not be by the wind of words or rhetoric but by the power of national policy.’

“In the current circumstances, the reference to his New Departure is one that we should reflect on for the future.

“As we commemorate the centenary of 1916, it is my hope and intention to lead a republic where our society is indeed united.”

At an event tonight for relatives of those who took part in the Rising, he is expected to say that the different strands of thoughts that motivated the combatants in Easter Week were reflected in Ireland since independence.

He is also expected to pay tribute not just to those whose names appear in the history books, but to others who took to the streets during the Rising.