Taoiseach welcomes ‘clear finding’ that removing Callinan was not even discussed 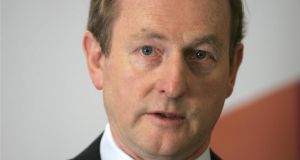 An Taoiseach Enda Kenny: “What is deeply regrettable – and very significant, was that neither I, nor any of the other participants in that meeting, were made aware of the existence of a formal letter from the then commissioner on the taping issue which had been sent to the Department of Justice.” File photograph: Dara Mac Dónaill/The Irish Times

Statement by An Taoiseach Enda Kenny on the publication of the interim report of the Fennelly commission of investigation:

“Yesterday I received the final draft of the interim report of the Commission of Investigation that focused on the events leading up to the retirement of then garda commissioner Martin Callinan in March of 2014, and on the handling of a letter of 10 March 2014 from the then commissioner to the Department of Justice.

“I want to thank Honourable Mr Justice Nial Fennelly for his work on these matters and for his continuing work on the substantive matter of widespread recordings in Garda stations.

“This report was carried out at my specific request and, as promised, I am publishing the full report at the earliest opportunity, following clearance today by the Attorney General’s office.

“The Commission of Investigation also concludes that ‘serious information deficits and multiple failures of communication’ beset the events leading up to the retirement of the then garda commissioner. This criticism presents significant lessons for institutions and officers of state about governance and process. These need to be studied further and Mr Justice Fennelly’s observations need to be acted upon in the spirit in which he has presented them in his report.

“It should be recalled that in the weeks leading up to the then garda commissioner’s decision to retire, the justice system, and An Garda Síochána in particular, were engulfed in a series of controversies.

“The allegations made by Garda whistleblowers, and the handling of these allegations by the Garda authorities, had been causing deep public concern for some time. In addition, relations between the gardaí and its oversight and accountability body, GSOC, had deteriorated significantly.

“Twelve days prior to Mr Callinan’s decision to retire, the Garda Inspectorate published a report on the penalty points controversy that was widely interpreted as vindicating the complaints of the whistleblowers. This reignited the issue of the former commissioner’s treatment of these whistleblowers, and particularly his use of the term ‘disgusting’ in reference to them at the Dáil Public Accounts Committee.

“From Thursday 20th March, a number of Government Ministers effectively called on the then commissioner to withdraw or clarify this remark.

“Throughout this period, I strongly, consistently and without qualification, defended the then commissioner, including in Washington on 13th March and again in Brussels on 21st March when I called on Ministers not to publicly comment about the then commissioner in advance of the Cabinet meeting to be held on Tuesday 25th March.

“There was significant media commentary on these controversies and much speculation as to whether the then commissioner would issue an apology or clarification for his remarks.

“It was against this backdrop that on Sunday March 23rd I was informed by the Attorney General for the first time of the serious issue of widespread recording of telephone conversations in Garda stations. The Attorney General was deeply concerned at the revelations and it was clear that I, as Taoiseach, with responsibility for notifying the Cabinet of sensitive legal cases, would have to bring this new information to their attention and it would form part of the discussion on the other ongoing controversies at the Cabinet meeting on Tuesday 25th March.

“My purpose in calling the meeting on the evening of Monday 24th March was to gather as much information as possible on the taping issue in advance of the following morning’s Cabinet meeting so I could fully inform the Government of this latest revelation, particularly as it related to the Bailey case.

“What is deeply regrettable – and very significant, was that neither I, nor any of the other participants in that meeting, were made aware of the existence of a formal letter from the then commissioner on the taping issue which had been sent to the Department of Justice. While the Interim Report criticises the delay in submitting this letter on a matter of such significance, it had been with the Department of Justice for two weeks at this stage.

“Had this letter been brought to my attention on the night of Monday March 24th, a meeting between Mr Purcell and the then commissioner would not have been necessary and this letter could have been presented to the Cabinet the next day.

“Instead, I was left in a position where a Cabinet meeting was about to take place, it was now clear that a Commission of Investigation would have to be proposed, the matter of recordings in Garda stations would become public and I made a decision that it was only fair and right to ensure that the then garda commissioner was made aware of the situation and my grave concerns.

“Since the events covered in this interim report, and the various controversies that surrounded the justice system at that time, the Government has decided on and progressed a series of far-reaching reforms.

“The decision to establish an independent policing authority represents the most radical reform of An Garda Síochána since the foundation of the State, bringing a dedicated layer of public oversight to the administration of policing services and providing a new engine to drive reforms to ensure that the force is fit to meet the challenges of 21st-century policing.

“Legislation has been enacted to strengthen the powers and functions of the Garda Síochána Ombudsman Commission, including enabling it to deal with and investigate complaints from serving members of the Garda force.

“In addition, the Protected Disclosures Act has been extended to allow serving gardaí to make protected disclosures to GSOC in confidence.

“In 2014, the Government commissioned the Toland Report which identified a number of deficiencies in the structure, management and operation of the Department of Justice. On foot of its recommendations, a programme for change and a new strategy statement for the department have been finalised and are now being implemented.

“When these reforms are fully implemented across the policing and justice system, I am confident that the reporting and communications failures that are identified in this interim report will not be repeated in the future.

“For now, this aspect of the commission’s remit has been dealt with. I look forward to Mr Justice Fennelly’s final report into the substantive matter and to his recommendations and final conclusions.”