Enda Kenny makes his first comments since election count day, saying water charges administered by a single national utility are a fundamental issue for Fine Gael and he is open to talking to other parties about forming a government. 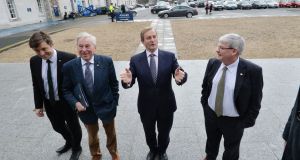 Left to right: John Concannon, director of 1916 events; Maurice Manning, chair of the Expert Centenary advisory group, Taoiseach Enda Kenny and Raghnall Ó Floinn, director of the National Museum of Ireland, at the launch of the National Museum of Ireland’s Proclaiming a Republic: The 1916 Rising exhibition which open to the public March 3rd. Admission is free. Photograph: Alan Betson/The Irish Times

Taoiseach Enda Kenny has said water charges administered by a single national utility are a fundamental issue for Fine Gael during negotiations on forming a new government.

Mr Kenny also insisted people do not want a second election following last week’s poll and called on people to continue paying their water bills amid uncertainty over the future of Irish Water.

Mr Kenny made his first comments since election count day on Wednesday afternoon in Dublin and said he is open to talking to other parties and smaller groupings about forming a government.

Fianna Fáil has said the abolition of water charges and Irish Water is a key issue for it, even if it supports a minority Fine Gael government.

However, Mr Kenny said a single national water authority and some “contribution” to pay for water is a fundamental issue for Fine Gael, adding it would be a historic mistake to reverse that policy.

He said it is his duty to form a government as Taoiseach and leader of Fine Gael, which he said received the highest vote in the the election and has the greatest number of Dáil seats.

Minister for Agriculture Simon Coveney last night said Fine Gael will be open to taking about water charges with other parties, but Mr Kenny described charging and one national utility as a “fundamental” for Fine Gael.

“Simon Coveney was correct in what he said, in that Fine Gael, as the largest party in this Dáil want to move on and put in place a process to form a government and part of that is we are prepared to listen to other groups and like minded parties about how that should happen,” Mr Kenny said.

“I want to say in respect of Irish Water that I think it would be a seriously costly and seriously historic mistake to move away from having a single national utility to provide water and clean water for the country and for the future and provide services for waste water and at the same time to have a fair and affordable regime of contribution for that. We are subject to a water directive.”

He said it is “perfectly in order” to listen to other parties but said it is a “fundamental issue” for Fine Gael “that you have a single national utility for water and that you have a fair and affordable contribution regime”.

Meanwhile, Fianna Fáil TD Dara Calleary said water bills have to be legally paid because of decisions made by Fine Gael and Labour because it was the law.

On Wednesday morning Shane Ross of the Independent Alliance said his group would play a “constructive” role in the formation of a new government.

He told RTÉ’s Morning Ireland his group had 10 principles, including a greater role for the entire Dáil in legislation, which it is willing to negotiate on.

He added that the Independent Alliance wanted to see a “complete and utter reform” of Irish Water and said Mr Coveney’s comments suggest it would be foolish for the utility’s customers to continue to pay their bills.

On the issue of dealing with Fianna Fáil, Mr Kenny said the proposition of a Fine Gael-Labour government had been rejected by the electorate.

“The people have given their verdict. The numbers in the Dáil in the way that they are now falling through make it difficult to put forward a proposition for government. That’s what the people expect us to do now.

“As the leader of the largest party and the Taoiseach, it is my responsibility to work to see that that process is put in place and that includes talking to the Fianna Fáil party.”

However, Mr Kenny would not be drawn on whether his preference is for a Fine Gael-Fianna Fáil coalition or a Fine Gael minority government supported from the Opposition benches by Fianna Fáil.

“We haven’t started any discussions or any negotiations about any options yet. There are a number of options, they are all difficult. We have not had any discussions with Fianna Fáil or with any other party or group yet.”

Earlier, former Fine Gael TD Alan Shatter criticised his party’s general election campaign and said there will likely be another election within 18 months.

Mr Shatter said communications during the campaign were a disaster and vote management strategies reduced party candidates in some cases to “little chess pieces to be moved on a chess board”.

There was “obsessive engagement with focus groups” and campaign planners seemed unwilling to listen to what members of the parliamentary party were saying, he told RTÉ’s Today with Seán O’Rourke programme.

“We all got lost in fiscal space,” he said. “That was the most bizarre commencement of a campaign that I have seen in my 30 years in politics.”

Mr Kenny, as leader of the party, ultimately had questions to answer over the failure of the campaign, Mr Shatter said.

He added that he believed there was a likelihood another election would be called within 18 months and that Fine Gael would not make the same mistakes during that campaign.

With two seats remaining to be filled in general election 2016, parties and groups have already started discussions about setting up a new government.

Meanwhile counting resumed at 2.30pm in Longford-Westmeath on Tuesday to fill the constituency’s – and State’s – remaining seat. As few as three votes separate Fine Gael’s James Bannon and Labour’s Willie Penrose who are battling against elimination.

The contest is an important one for Labour as it would give the party a seventh seat and thus speaking rights in the new Dáil.