‘Let’s keep the recovery going,’ repeats Taoiseach as he takes to the road 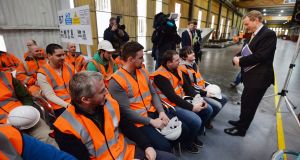 The Taoiseach made a concrete start to the general election campaign Thursday.

It was first stop Meath West and a visit to local company Shay Murtagh, a firm that makes precast concrete solutions and employs over 250 people. All dragged from their machines to hear from the main man himself.

You see Enda has his own concrete solution and the recovery is underway.

The deficit has fallen, the borrowing rates are down and the economy is fragile.

There are still risks, he warned, from Brexit, the Chinese economy and the war in the Middle East.

“These are all issues outside Ireland and may or may not cause pressure or a shock to the system... So the essential point here is that if we want our country to thrive, if we want to meet the challenges of the future, if we want to be able to appoint the personnel that we need to employ, if we want to provide the facilities for our young and not so young and our senior citizens then you have to have a thriving economy. That’s why we have the calling ‘lets keep the recovery going’.”

Eyes glazed over. Some stifled yawns. Others snapchatted the moment to their friends.

See all that macroeconomic chatter was somewhat wasted on the audience. Maybe he should have used it on those pesky journalists asking about the “fiscal space” his Government keeps telling us it has.

It was then off to Mullingar, Co Westmeath to do the first walkabout tour of the campaign trail. Flanked by Fine Gael TD James Bannon and Councillor Peter Burke throughout Mr Kenny was guided from hotel to pharmacy to constituency office.

At one stage Bannon got lost in the crowd while the Taoiseach powered on without him. It wasn’t long before Bannon bolted his way back beside his leader and his constituency rival.

Somehow he only managed to bump into Fine Gael supporters who just happened to be hanging outside the local chemist and hotel wearing ready-planted party stickers. Strange that.

The Taoiseach did have some success on the first day on the trail. He managed to find the first little child for photographs. Little Paiti Kenny (2) didn’t blink an eyelid as Mr Kenny grabbed her into his arms and the cameras flashed.

“I’ll get your nose, where is your nose,” Taoiseach teased the little one.

It was off to Kildare then for Mr Kenny’s whistle-stop tour of constituencies paved only with Fine Gael supporters, it seems.