Characterisations of the election result as groundbreaking do not reflect reality 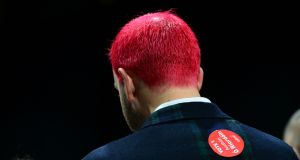 A Labour supporter keeps an eye on the Dublin Bay North recount. Some would argue that Labour is no longer even a “left” party. Photograph: Dara Mac Dónaill/The Irish Times

Much has been made since the weekend of the so-called seismic shift in Irish politics that took place at this election.

“People have voted for a fair and equal Ireland which has high-quality public services. wrote Dr Rory Hearne of the left-leaning Tasc think tank yesterday. “This represents a significant shift in the political value base of voters.”

“The narratives that chimed with voters were somewhat fragmented,” wrote Fintan O’Toole on a similar theme in this newspaper. “But they cohere around a core set of ideas: the urgent need to shift towards greater equality and rebuild the services necessary for individual and collective dignity.”

Perhaps this is all true, although it depends which way you squint at it. Commentators tend to pick and choose their numbers to suit the argument they’re making at the time.

In the 2011 general election, left-wing parties (Labour, Sinn Féin and the United Left Alliance) received 31.5 per cent of the vote. In this contest, the nearest equivalent array of parties (Sinn Féin, Labour, AAA-PBP and Social Democrats) received 27 per cent.

A couple of former ULA TDs were successfully returned as Independents, but their impact on the national result is marginal. And of the 24 or so Independents elected across the country, only a third could be described as left-wing.

(Some will argue that the Labour Party should not be considered left, but they can’t have it both ways. The 19 per cent of the electorate who voted Labour in 2011 must have believed they were voting for a left party; otherwise the charge that they were subsequently misled doesn’t stand up.)

“The spectrum may be very wide, but so is the consensus it represents: at least two-thirds of voters are somewhere on it,” O’Toole agreed. That assertion sits oddly, though, with the long-standing accompanying argument: that any differences between the two largest parties are minimal.

There is no doubt that the result of this election represents a resounding rejection of the proposition from Fine Gael and Labour that they deserved to be returned to power on the basis of their performance in office and their plans for the next five years.

Ipsos/MRBI polls carried out for The Irish Times in the run-up to the campaign indicated that voters were far more inclined to want extra spending on health and housing than to demand tax cuts.

For some reason, Fine Gael in particular did not get the same message from its own research, or chose not to believe it. Fianna Fáil, on the other hand, heard it loud and clear and positioned itself as the “fairer recovery” party.

Yet again, an outgoing Fine Gael/Labour administration failed to judge the popular mood correctly, and a Fianna Fáil opposition cannily took advantage. This is hardly a new phenomenon in Irish political history, but those pining for realignment of politics along a “normal” ideological axis should probably pause for thought before welcoming the fact that Fianna Fáil has, yet again, stolen the left’s clothes.

Beyond the core economic debate, it was suggested before the election that younger, socially progressive voters energised by last year’s marriage equality referendum would now coalesce around the Repeal the Eighth campaign.

Meanwhile, whatever the success of gender quotas, the new Dáil will be a less diverse place when it comes to sexual orientation, with the number of openly gay or lesbian deputies reduced from four to two.

In 2011, at a moment of existential crisis, the Irish people took the least radical option for change. In 2016, they’ve done much the same thing. The rise of Independents and emergence of small parties may make the new Dáil more interesting and less predictable, but it hardly represents the fundamental change that some claim to see.