We translate jargon so you don’t have to 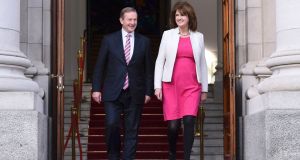 Taoiseach Enda Kenny and Tánaiste Joan Burton. The Coalition argues that there is no alternative majority available to voters. Photograph: Clodagh Kilcoyne/Reuters

What does it usually mean?

Tina is an acronym for There Is No Alternative.

What does it mean in this election?

The two current Government parties argue that, because Fianna Fáil and Sinn Féin have both ruled out going into coalition with Fine Gael, or with each other, there is no mathematically possible majority available to voters except for a continuation of the current Fine Gael/Labour arrangement.

What does it really mean in this election?

It means if you don’t vote for Fine Gael or Labour, you are being irresponsible and will be plunging the country into chaos, anarchy and despair. Think Cormac McCarthy’s The Road, but with worse weather.

Where does it come from?

Embarrassingly for Labour, it is indelibly associated with the late Margaret Thatcher, who often said that “there is no alternative” to capitalism. It became popular among advocates of free markets, free trade, and globalisation, and found a further echo in Francis Fukuyama’s post-cold war bestseller The End of History and the Last Man, which argued that capitalism had won – forever. Some have suggested that this belief led to the regulatory failures of unfettered capitalism which caused the 2008 financial crash.

The phrase has also cropped up during the peace process in Northern Ireland, where it was often used against opponents of the Good Friday Agreement. “There is no alternative to power-sharing and the all-Ireland institutions,” Martin McGuinness said in 2014. “There is absolutely no alternative to the Good Friday Agreement.” Despite those efforts, TIANA. has failed to catch on.

Will we hear it much?

Probably not. The Thatcher association doesn’t play very well here, plus there’s a whiff of the smug and the authoritarian about it. Probably big in North Korea though.