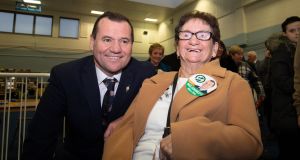 It is a case of sixth time lucky for Cllr Paul Donnelly (51) who first ran for the Dáil in the 1998 byelection following the resignation of Fianna Fáil minister Ray Burke.

The father of four, married to Angela Donnelly and living in Clonsilla, has contested three byelections and three general elections.

In between in 2008 he was co-opted to Dublin Fingal County Council originally for Mulhuddart, an electoral area that has since divided to include Ongar, the ward he represents.

He has replicated his poll topping success in last year’s local elections, breezing into first place and a Dáil seat with a surplus of 3,730 votes.

A project co-ordinator and community outreach worker with child and family agency Tusla, he also coaches and mentors at St Peregrine’s GAA club, home to Dublin star Eric Lowndes. His TV viewing centres on “anything to do with politics”.