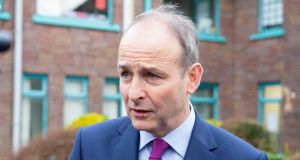 Micheál Martin: Can he stick to his unwavering mantra of no coalition with Sinn Féin if the numbers do not stack up for an alternative government?

After nine years at the helm it is now do or die for Fianna Fáil leader Micheál Martin in his bid to finally become taoiseach. He spent the party’s five wilderness years between 2011 and 2016 reorganising the party and its decimated cohort of TDs.

And the past four years have gone into building a more than doubled but still restive and volatile parliamentary party into a line-up set for government office. All eyes will be on whether he can stick to his up to now unwavering mantra of no coalition with Sinn Féin if the numbers do not stack up for an alternative government, especially when some of his TDs favour such an arrangement. It may be his only option if he is to be taoiseach after 14 years as a government minister, and nine years as opposition leader.

Now (59), he first became a TD in 1989, served on the frontbench from 1995 and as minister for foreign affairs, health, education and enterprise. He is married to Mary O’Shea and they have two adult children.