Election 2016: On the canvass with Catherine Murphy 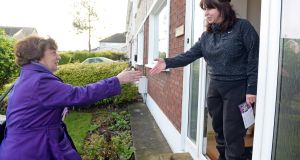 Murphy, one of the founders of the Social Democrats, was canvassing in Leixlip where she has lived for nearly 40 years.

She is seeking re-election in Kildare North where she was first elected as an Independent TD at a byelection in 2005, only to lose her seat in the 2007 general election and regain it in 2011.

As Murphy moves briskly between houses in her distinctive purple coat, Ms Heslin says she also likes the principles of the other Social Democrats leaders Róisín Shortall and Stephen Donnelly.

“I’m delighted with the quality of people they have,” she says.

Murphy’s David and Goliath-style tangle with businessman Denis O’Brien over the Siteserv controversy, which brought her to national attention last year, has not been forgotten and is described as “brave” by a number of constituents she meets on her canvass.

With only 14 candidates running in some very tough constituencies, the tiny Social Democrats are not going to be contenders in the premier political league.

But opinion polls are increasingly indicating there could be all to play for in the battle of the minnows.

Observers of US politics talk about the “Big Mo” taking hold during election campaigns.

The Social Democrats could be said to be experiencing something of a “Mini Mo”, boosted by the performance of Donnelly in the party leaders’ debate on television last Monday night.

But while the re-election of Murphy, Shortall and Donnelly seems certain, the bookmakers continue to rank the party’s other candidates as outsiders, much to the astonishment of their enthusiastic canvassers.

She says she believes the Fine Gael/Labour Coalition’s big Dáil majority “made them very arrogant” and led them to misjudge the public mood in this election campaign.

“The mood is very much a societal one, people are talking about ‘we’ and ‘our’ healthcare system and they want those things put right, and they understand that there are resources required to put those things right.

“Childcare would be a very big issue as well.”

The issues of gangland crime, resources for gardaí and homelessness were mentioned on the Leixlip doorsteps, along with local people’s difficulties getting places for their children in an Irish-speaking secondary school.

Donnelly’s performance in the debate was mentioned frequently and positively on the canvass.

“Your speaker did very well. He didn’t let them bring him down,” one woman tells Murphy.

A group of school children walking with their teacher react giddily when they see Murphy’s purple coat.

“That’s the lady you saw on the poster,” the teacher says.

Ben Doherty, busy up a ladder cleaning gutters, says Murphy is “a good woman, and that’s a fact”, while Anne Savage tells the candidate a number one vote is guaranteed.

The Social Democrat party structure appears somewhat flimsy at present when compared to the armies of apparatchiks and spin doctors who trail after more established parties.

There is an idealism among the youthful volunteers which has been absent from Irish politics for some time, however.

One canvasser has been busy knitting hats for colleagues in the party colour, purple.