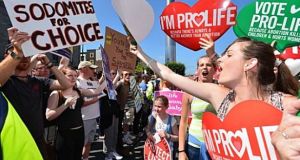 the Government is expected to agree to insert a new provision in the Constitution enabling the Oireachtas to legislate for abortion, if the amendment is repealed. Photograph: Alan Betson

Eight of the 58 members of the Fianna Fáil parliamentary party attended a meeting last night organised to oppose the repeal of the Eighth Amendment to the Constitution.

All TDs and Senators were invited by Carlow-Kilkenny TD Bobby Aylward to meet to discuss forming a strategy ahead of the referendum, which could result in the introduction of laws significantly liberalising the State’s abortion regime.

The meeting followed party leader Micheál Martin’s unexpected expression of support for the repeal of the amendment and for women to be allowed abortions up to 12 weeks into a pregnancy. This was in line with the recommendations of an Oireachtas committee.

The meeting heard claims other TDs were encouraged not to attend the gathering or to create a divide in the party.

Mr Ó Cuív strongly criticised “unelected officials” in the party for selecting certain individuals for media interviews. There was a view expressed that only TDs who were close with the leader were chosen to appear in the broadcast media.

It was agreed they would take their concerns to the parliamentary party meeting on Wednesday night at which Mr Martin is expected to face criticism.

Mr Martin addressed the matter at a meeting of his front bench on Tuesday, saying he had approached the issue in a personal capacity.

Fianna Fáil TDs have been told they can vote with their conscience on the abortion issue. While Mr Martin accepted many did not agree with his view, he insisted everyone should respect each other’s opinion.

Meanwhile, the Government is expected to agree to insert a new provision in the Constitution enabling the Oireachtas to legislate for abortion, if the amendment is repealed. Taoiseach Leo Varadkar confirmed a special Cabinet meeting would take place on Monday.

At the meeting, Minister for Health Simon Harris will ask the Government to formally agree to the holding of a referendum and to formally allow him to draft the Referendum Bill.

Mr Harris will also seek approval to draft the general scheme of legislation to demonstrate what will replace the Eighth Amendment.

The Minister will have to ask Cabinet to formally adopt the recommendations of the Oireachtas committee on the Eighth Amendment, which allows for abortions up to 12 weeks and terminations when a mother’s life, health or mental health is at risk.

The Irish Times understands the Attorney General Séamus Wolfe will outline his legal advice including the necessity to include a new provision giving the Oireachtas the sole right to make the law on abortion.