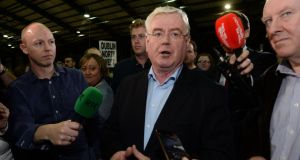 Former tánaiste Eamon Gilmore, who championed same-sex marriage when he was leader of the Labour Party, has described the outcome of the referendum as a “very liberating day” for gay people.

Mr Gilmore, who was cheered by party activists as he arrived at the Dublin city count centre in the RDS on Saturday, said the strong Yes vote “was a national act of inclusion”.

Two years ago, Mr Gilmore described same-sex marriage as the civil rights issue of this generation and today said there “probably wasn’t a great deal of support for that point of view” at the time.

Mr Gilmore, as party leader in 2011, pledged in the Labour Party manifesto to hold a referendum on gay marriage.

The Labour Party introduced the first civil partnership legislation as a private member’s Bill in 2006.

When the party went into coalition with Fine Gael in 2011 it was agreed in the programme for government that it would go to the Constitutional Convention.

“Somebody has to take a step out onto the ice at some stage. But anyone who wants to put that theory to the test has only to look at the enormous turnout yesterday and the enthusiasm of young people in particular to come and vote for this issue,” he said.

He also said the engagement by families was a strong feature of the campaign, adding: “In a way yesterday’s decision has moved Ireland away from a situation where if you were different in a family you were somehow excluded.

“This was an enormous decision by everyone yesterday to say we want every member of our family to be part of this family.

“People were going out and doing it not just for themselves, they were doing it for brothers, sisters, aunts, uncles. That sense of family was very much a feature of the campaign.”

“This is a country that many would have regarded as very socially conservative in the past. Now it’s the first country in the world to approve of gay marriage by popular vote.

“And I think that that will be very encouraging to people who are living in countries where homosexual people are still being persecuted, where their human rights are being denied. And I think it will give them great courage. I think that’s a very, very strong message.”

Mr Gilmore also expressed his delight at the high turnout.

“I was a bit concerned earlier in the campaign that while people were favourably disposed towards it, they mightn’t actually come out to vote.

Mr Gilmore said he respected No voters. “I think the campaign was actually very civilised compared to other referenda that I’ve been involved in.

He said: “What I would say to No voters is that there is now a very clear decision.”

He believed “the most impressive thing about the campaign was families”

The former minister said “families have discussed this. I think there was a sense within families that no member of their family was going to be excluded”.

He also paid tribute to the intervention by former president Mary McAleese in the campaign.

She expressed the family view “very articulately and forcefully. She gave very public expression to that - the way families united around this”.

“I think her intervention reassured a lot of people who perhaps at that stage of the campaign were beginning to doubt - people who were leaning towards Yes but were rattled by some of the posters and some of the stuff they were seeing.

Speaking about the timing of the vote he said there were two reasons behind the date.

“[Last year] it was going to clash with European and local elections and there was a sense that it wasn’t a good idea to run it with those elections.

“Secondly we also felt that it would be desirable to put the legislation in place before holding the referendum- to have the Family Relationships Bill enacted before the referendum.”