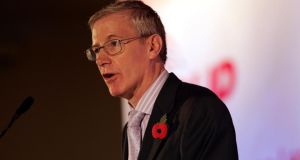 Mr Campbell earned laughter from some of his DUP colleagues in the Assembly yesterday when he opened comments through the speaker by saying, “Curry my yoghurt, can coca coalyer”.

There was bafflement over what phonetic interpretation he meant with “curry my yoghurt” although the “can coca coalyer” remark was a reference to how Sinn Féin and some SDLP members open their remarks through the speaker by referring to him as “Ceann Comhairle”.

The Sinn Féin acting principal speaker Mitchel McLaughlin was unimpressed. He said today that if Mr Campbell was making an attempt at humour that he “failed miserably”.

He barred Mr Campbell from speaking in the Assembly for a day. This had little practical application as Mr Campbell was in Westminster on House of Commons business.

“The spirit of mockery was blatant and reflects badly upon this House and the deputy speakers,” said Mr McLaughlin when making his ruling. “I am not prepared to allow such a breach of standards to pass without consequence.”

Mr Campbell has refused to apologise for his comments, contending that Sinn Fein politicians used the Irish language when opening their remarks, before transferring to English, purely for “political reasons”.

Mr Campbell said that his words “concentrated a few minds as to how ludicrous are these people who insist on doing this all the time”.

“I am very fond of Ulster Scots music, but if I started every question with a few words of Will ye go Lassie Go?, they’d say: ‘Catch yourself on’,” he told BBC Radio Ulster’s Nolan programme.

His comments however were criticised by Linda Ervine, sister-in-law of the late Progressive Unionist Party leader David Ervine, who is studying Irish. “Unfortunately Gregory lived up to his name,” she tweeted. “Cam -crooked. Beal - mouth. Sometimes it would be better to keep it shut.”

Ms Ervine said his remarks were just “another example of the immature politics being played out at Stormont — embarrassing”.

The Sinn Féin culture minister Carál Ní Chuilín has raised the issue with the speaker’s office while Sinn Féin MLA Rosie McCorley referred them to the North’s human rights and equality commissions.

“Gregory Campbell’s utterly disrespectful comments in the Assembly chamber in relation to the Irish language have quite rightly sparked anger from the Irish community and others,” said Ms McCorley.

She added, “Everyone has the right to speak Irish and thousands of people do on a daily basis, regardless of whether Gregory likes it or not. No amount of politically motivated posturing will deter Sinn Féin from promoting the Irish language and continuing to lobby for the rights of Irish speakers.”