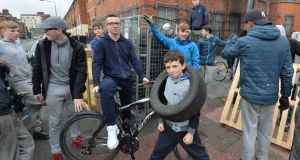 Pearse O’Leary (16), from the Sheriff Street area of Dublin, is pessimistic about job prospects after school.

“As soon as anyone hears you’re from around here, they won’t give you a job,” says the teenager, who goes to school in Marino.

“There’s nothing to do around here, just hanging around corners.”

Kieran Mulvey, former head of the Workplace Relations Commission and now head of the Government taskforce appointed to regenerate Dublin’s north-inner city, hopes to change that.

He wants the legal and financial firms in the neighbouring International Financial Services Centre (IFSC) and the docklands areas to provide jobs or sponsor third-level education for young people in the area.

He says large firms and those building large developments along the Liffey should show a greater social responsibility to the community in which they operate.

Such a “targeted” approach would mean potential employers, in some instances, overlooking previous “minor misdemeanours” or “petty crime” in order to provide greater assistance to those hoping to stay on in education and enter the workforce.

A scheme along these lines could provide on-the-job training or sponsor education in third-level institutions such as Dublin City University, Trinity College Dublin or the National College of Ireland, which are in the surrounding areas.

It was set up by Mr Kenny in the wake of a number of gangland murders earlier this year. Mr Mulvey has been meeting local groups and is expected to produce a final report in the weeks ahead.

His task will be to draft a five- to 10-year strategy, but he said there must also be measures that can take effect immediately.

Mr Mulvey told The Irish Times a more radical approach was needed to improve the area, such as significant improvements to its physical environment.

This would include encouraging the use of derelict sites through “use it or lose it” penalties for land owners or compulsory purchase orders to drive development.

While he said he has not suggested tax incentives, Mr Mulvey said he wanted to “explore all options”.

Teenagers such as Pearse say they would like to see more facilities for young people.

Referring the demolition of local flats – St Laurence’s Mansions, St Bridget’s Gardens and Phil Shanahan House – in the 1990s to make way for shiny new office blocks, one of the youths says: “We gave them our flats and all we got back were corners.”

“I’d love to see a games room or a scrambling track,” says Robert (16), who doesn’t want to give his surname.

Stables or a skate-park, suggests another boy. Or a pool hall, says another.

“All there is around here is the boxing club, and not everyone is into that,” says Pearse.

Pat Gates, co-ordinator of the Young People At Risk project in Ballybough, says the big firms of the IFSC, should “absolutely do more”.

“The inequality between the wealth in the IFSC and what is there for the young people is palpable.

“They should be doing much more to integrate themselves into the community, by being part of it,” Mr Gates says.

“Since the shootings and the promises that something would be done, people are energised. A lot of work is going on behind the scenes, reports being written. A taskforce has been set up.

“But we need real commitment now, not only from politicians but from big business, which has the real power in this area.

“We need to see real investment and, not only in training and jobs for young people but also in time, an acceptance that a lot of the young people come with baggage and will need supports. You can’t just throw money at it.”

Geraldine Comerford, manager of the North Wall Community Development Project (NWCDP) on Sheriff Street, also says “not all young people are going to be able to go straight into college”.

“Some really fresh thinking is needed that joins the dots. There are businesses with funds we can apply for, but everyone is applying for the same funds.

“We need new structures too. Enough is enough. We’re all in Dublin 1 and we need to work in real partnership,” Ms Comerford says;.

Marc Kelly, also of the NWCDP, stresses the need for training and employment that provide “real pathways”.

Pearse, asked what he would do if, in an ideal world, he could go to any college or do any job, says: “Yeah college, maybe Trinity. If the chance was there I’d take it.”