Dublin’s discipline on backstop wobbles as strain starts to tell 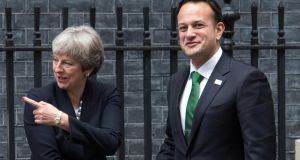 Where next? Theresa May and Leo Varadkar. Photograph: Carl Court/Getty Images

Pressure finds weaknesses and cracks; that is its nature. And there is no doubt that the Irish Government is under pressure as the continuing inability of the UK to say what it wants means the Brexit deadline at the end of March – with all that it could mean for Ireland – looms ever larger.

Signals from the Irish Government, after a long period of rigid discipline, have become decidedly mixed in recent days. This has been led from the very top – Taoiseach Leo Varadkar’s comments about troops on the Border may have been overhyped, but he knows he shouldn’t have made them at all, at least not in the way he did.

Yesterday The Irish Times reported that the Government would be willing to see the withdrawal agreement reopened if the British were to decide they wanted to stay in the customs union – prompting Minister for Finance Paschal Donohoe to insist that neither the withdrawal agreement nor the backstop would be changing. But if the British move, two senior sources reflected, that position might change.

Donohoe’s comments came after Brussels privately expressed its alarm at the timing, rather than the substance, of the story. After all, the Irish Government aren’t the only ones giving mixed signals. Reports over the weekend suggested that Jean-Claude Juncker, president of the European Commission, had told Theresa May in a phone call that the price of revising the backstop was permanent membership of the customs union.

Yesterday, Sabine Weyand – deputy to Michel Barnier – told a conference in Brussels that the EU was open to “alternative arrangements” to the Irish backstop but for now no such alternatives exist. Perhaps Tuesday’s House of Commons votes will get around to specifying those alternatives. But perhaps not.

Chaos in Dublin and Brussels, chortled Sammy Wilson of the DUP. His thoughts on the situation in Westminster are as yet unclear, though he exhorted May to “take advantage” of the disarray.

Conversations with senior figures in Dublin suggest that Wilson’s assessment is plain wrong: there isn’t chaos in Dublin, though senior sources acknowledge recent gaffes were not helpful. What there is, however, is the realisation that the Government may soon be facing an uncomfortable choice: between taking its chances on the outcome in Westminster, and seeking to help May by moving on the backstop.

This decision is complicated by the sheer range of possibilities in the UK. What a gamble it would be: Westminster could deliver a hard Brexit; or the softest of soft Brexits. It could stumble into a general election – and that could mean a second referendum. And a second referendum could result in a Remain vote, or another Leave result.

Or Westminster could decide ultimately to pass May’s deal. But that is unlikely to happen without some help from the EU, and some movement from Ireland on the backstop.

For now Ireland and Brussels will await the results of Tuesday night’s votes and then try to figure out what they mean about parliament’s and the British government’s likely stance in the coming weeks. At some point after that, the Irish Government will have to decide whether to roll the dice at Westminster.