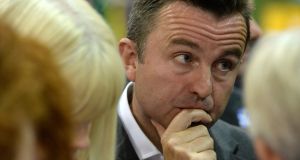 Anybody who doubts the capacity of politics to surprise should have gone to the RDS in the early hours of this morning. What looked like a relatively straightforward contest for the second and third Dublin seats for the European Parliament was transformed into a cliffhanger, with myriad twists and turns, and three candidates not knowing how their fates would be resolved.

On a bad day for Fine Gael, it was always known that Brian Hayes needed a good first count to ensure he would be elected in the three-seater. He ended with almost 55,000 votes, 10,000 to the good over Green Party leader Eamon Ryan, and almost 20,000 votes ahead of the independent candidate Nessa Childers.

Ryan was in fourth place and breathing down the neck of Fianna Fáil’s Mary Fitzpatrick. Once he overtook her in the second count, it was widely acknowledged that her day was done.

Hayes’s numbers peoples always though he would need at least 16 per cent of the vote to feel secure and he was tantalisingly close to that numbers.

Childers had shown in 2009 in the East constituency that she was a sponge for transfers but the gap between her and her two rivals just seemed too much. And as the counts slowly ground out into the early hours of the morning that theory seemed to be borne out.

However, it was with the elimination of the Socialist Party’s Paul Murphy when everything changed. He transferred a whopping 14,000 votes out of his 30,000 to Childers. And while Ryan picked up over 5,000 of those it still brought Childers right up... and going into the next count she was some 130 votes ahead of him.

Childers herself had not appeared in the count centre all night although Hayes and Ryan were both there. With plenty of blanched faces and silent worried looks, their teams huddled together urgently to assess the situation. Hayes was still about 6,000 votes ahead but with the elimination of Mary Fitzgpatrick’s 50,000 votes the outcome could go either way.

There was a possibility that both Ryan and Childers could get enough transfers to overtake Hayes. And then there was the question of which of the two candidates, the independent or Green, would most benefit from Fitzpatrick’s transfers?

As the counting teams worked on batches of 5,000 votes, the number-crunchers from each team circled the vast hall to get some kind of visual fix on which way the transfers were going.

It was clear that Childers and Ryan were getting the bulk of the transfers but were they outscoring Hayes enough to close the gap? And was Ryan getting more than Childers? Initially it seemed he was but that picture too changed and it was quickly agreed that they were both attracting a lot, and it was very close.

And the announcement after 3.30am confirmed how close and to-the-wire it all was. Both Childers and Ryan had taken over 12,000 transfers but crucially Childers had taken a sliver - 300 or so - more. And somehow Hayes had managed to attract some 8,000 transfers from his Fianna Fáil rival, enough to bring him up to 73,000 ever so slightly ahead of his two rivals.

At this stage, he knew he was secure and he would get the seat. The relief on his face and his colleagues - including Paschal Donohoe and Leo Varadkar - was palpable.

But for Ryan and his team the despair and stunned silence was all too clear. Lynn Boylan had a small surplus of 1,600 or so after getting elected on the third count. These were distributed but served to increase the gap between her and Ryan.

1 Archaeologists are ‘quite sure’ they have found Red Hugh O’Donnell’s burial place
2 Maureen Dowd: Trump has been wearing a mask for years
3 Covid-19 restriction-lifting may speed up if cases keep falling
4 Three men charged with murder of Carlow man in Australia
5 Pricewatch: Left on the shelf - what we are no longer buying
Real news has value SUBSCRIBE